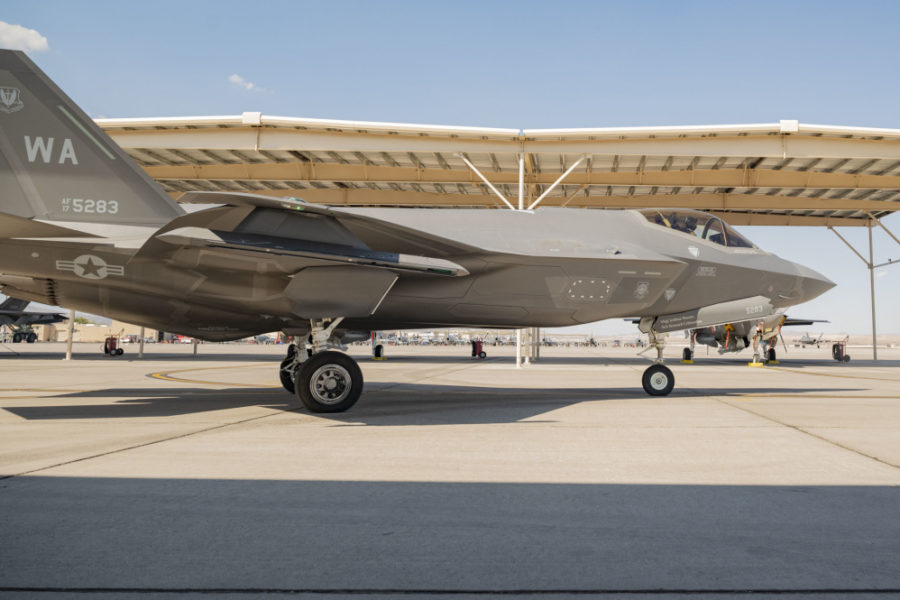 The initial “’toe in the water’ is in our adversary air replication,” Kelly said in the online Life Cycle Industry Days seminar put on by the Air Force’s Life Cycle Management Center. “That is the area I’m most interested in.”

Kelly also discussed cyber vulnerabilities of fighters and said he’s unaware of any move to curtail the total number of F-35 fighters.

It’s very expensive to put up a stealthy adversary for F-22s and F-35s to go against in mock combat, Kelly said, given that the choice is mostly limited to other F-22s and F-35s.

“Right now, … we cannot generate enough adversary air to really … stress” the Air Force’s fifth-generation combat aviators, he explained, because the cost per flying hour is prohibitive. What would be a “low-cost” alternative? Anything that costs “a dollar less than what I’d be putting up” of a manned nature, he added.

But “there are some solutions and promising technologies out there where I could essentially put up a low-observable and jamming platform with a significant amount of endurance,” at “roughly 25 percent of what it would cost me for a manned” adversary, he said. “That, to me, is ‘low cost.’”

As for the percentage of the future force that LCAAS will comprise, Kelly said it’s too soon to tell. The adversary platform is “step one of step many,” he said. He chafed generally at the idea of a “low-cost” aircraft because “nothing is cheap,” and said the Air Force will think carefully about what that means, but said the term “attritable” defines the role of such airplanes. They will be used when the mission demands them or where the cost of putting “a human son or daughter” at risk is too high.

Kelly also said the Air Force will be in the remotely piloted aircraft business broadly “for the forseeable future,” noting that the MQ-9 and RQ-170 fleet of intelligence, surveillance, reconnaissance and strike drones are “still operating … for obvious reasons.”

Low-cost Attritable Aircraft Systems, though, will be “a growth industry,” he added.

Asked about cyber vulnerabilities of fifth-gen aircraft, Kelly said he’s actually more worried about their support systems, “because as soon as I plug in a compromised support system, I could end up compromising the entire airplane.”

Kelly said he appreciates the F-35, which has performed well through “18 months of combat in the Middle East, with thousands and thousands of sorties,” and thousands of weapons expended, “but we need to migrate away” from systems that consume 80 percent of their cost in sustainability.

However, he isn’t aware of anyone in the Air Force promoting the idea of curtailing the planned number of F-35s to be purchased, which was set at 1,763 back in 2001.

“We have migrated from, in 30 years, … 4,000 fighters to 2,000 fighters, from [an average of] eight years old to 28 years old. We’ve gone from a force very focused on peer engagement to one optimized for counterinsurgency.” A 28-year-old fleet is “not optimized” for the peer fight, he said.

In that context, the F-35 helps reduce the average age of the fleet; it’s designed for a peer war; and “I need every airframe, and aviator, and piece of equipment, and maintainer, and sustainer that I can get.”