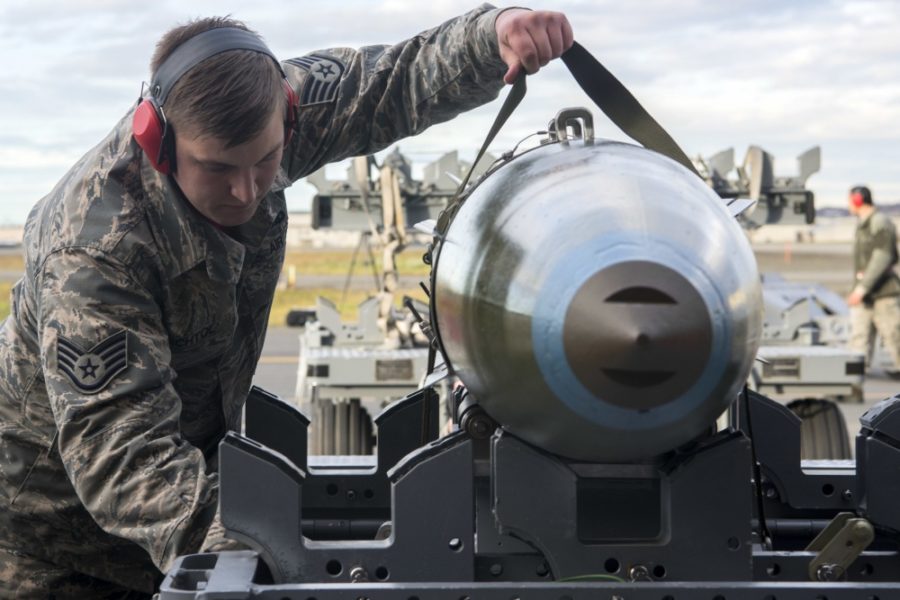 The Air Force slashed its request for most weapons in its fiscal 2022 budget request, while boosting its ask for longer-range, stealthy systems. The budget proposal indicates the service is either shifting away from short-range missiles and bombs or will soon find itself back in the boom-and-bust munitions procurement cycle—or both.

The Air Force’s request for Joint Direct Attack Munitions fell 88 percent, from 16,800 enacted in fiscal 2021 to 1,919 weapons in 2022. The high water mark of JDAM production was 30,872 units in 2019, meaning JDAM production for the Air Force will have fallen more than 93 percent in three years, if Congress goes along.

Most standard USAF munitions were requested at much smaller rates in the 2022 budget. Hellfire missile purchases would be reduced 74 percent; Small Diameter Bomb 1 would drop almost 60 percent; and Sidewinder and AMRAAM dogfight missiles would decline 27 percent and 37 percent, respectively, over enacted 2021 levels.

Maj. Gen. James D. Peccia III, deputy assistant secretary for budget, told reporters at the budget rollout May 28 that the Air Force is “reducing munition procurements as the program approaches warfighter inventory objectives.” The JDAM and SDB 1 “are at, or approaching, healthy inventory levels,” he said, and the money saved by not buying as many of the extant weapons can be plowed back into advanced systems like the Joint Air-to-Surface Standoff Missile-Extended Range and hypersonics programs such as the AGM-183 Air-launched Rapid Response Weapon, or ARRW. An Air Force spokesperson said the Air Force is “comfortable” at the level of the weapon stockpile.

Along with other shifts in funding, the munitions buy seeks to modernize the fleet “for a high-end conflict in 2030 and beyond,” Peccia said.

The only weapons USAF is asking to increase are the GBU-53 Stormbreaker (formerly the Small Diameter Bomb 2) and the AGM-158 JASSM-ER, which the Pentagon said is a crucial weapon due to its stealth and reach. Procurement of both weapons would be increased about 25 percent.

The Air Force is also working on a successor to the JDAM that would have longer range, reduced signature, and greater maneuvering capability to avoid terminal air defenses, about which the service declined to comment.

The JDAM and other cuts come just a year after Gen. Arnold W. Bunch Jr., head of Air Force Materiel Command, told Air Force Magazine he was hoping to end the “sine wave” cycle of boom-and-bust weapons procurements, especially as the weapons accounts tend to be bill payers for other parts of the budget.

After the 2021 budget request was revealed, Bunch said USAF was able to “make a dent” in its years-long munitions shortage, and the Air Force was on “a better trajectory” after preferred munitions were no longer being used at a high rate against ISIS in Iraq and Syria.

Bunch said he hoped to “level off” at the 2021 production rates, but that USAF was planning to change its weapons focus to “the high-end fight.”

Former head of Air Combat Command retired Gen. James M. Holmes said last year that the Air Force meant to “start slowing down” on JDAM, both to pay for other weapons and focus on threats such as China, which require munitions having greater range and survivability. JDAM and Hellfire are direct-attack weapons with limited range.

The advantage of smoothing out munitions production would be to give Air Force planners and industry alike more predictability about weapons production and lower costs by making smarter decisions about workforce and materials.

A spokeswoman for Boeing, maker of the JDAM, said, “Our contracts with the U.S. Air Force allow for flexibility in annual orders,” but the company declined to offer further comment.

Mark Gunzinger of AFA’s Mitchell Institute for Aerospace Studies said USAF’s move to increase the production of long-range systems at the expense of short-range ones is “exactly right” and “one of the few things I applaud in the Air Force’s budget.”

The JASSM-ER and other “mid-range standoff weapons are capable of penetrating contested areas and striking high value targets such as Chinese mobile missile launchers,” and in the case of the Long-Range Anti-Ship Missile variant of JASSM, Chinese ships as well.

“JDAM and SDBs are great weapons, but they were never designed to survive” in an integrated air defense system, Gunzinger said.

That said, the Mitchell Institute’s analysis concludes that “USAF’s planned inventory of JASSM and LRASM could be depleted in a matter of days during a major conflict with China.” Such systems have been “underfilled for years” by the Defense Department, and “it continues to do so, despite the fact that industry cannot quickly surge their production during a crisis.”

Lockheed Martin Missiles and Fire Control, builder of the JASSM and LRASM, is building a new plant to handle expanded production of the weapons at its Troy, Alabama, location.

Gunzinger said the Air Force must “balance the range, size, cost, and cost-per-effect of its future weapons. Hypersonic weapons, he noted, have very long range and are highly survivable, “but they are too large to be carried in significant numbers per sortie and they cost too much to buy in large quantities,” and so they may be “little more than niche weapons.”

Michael White, DOD’s lead for hypersonic systems, said in a Center for Strategic and International Studies program June 2 that the Pentagon aims to build hypersonic missiles “at scale,” and this will become more possible when smaller, air-breathing hypersonic weapons become available. The ARRW and its counterparts in the Army and Navy tend to be large systems which can only be carried by bombers, or fired by ships or heavy ground equipment.

The Air Force’s first production numbers released for ARRW, contained in its 2022 budget request, peg the cost of the first tranche of usable missiles at $13.4 million apiece.

A former senior defense official said recent Pentagon wargames showed that the winner in a Pacific conflict will be the side with the largest magazines of hypersonic missiles, and noted there are “thousands of aimpoints” in the theater, requiring the weapons to be affordable.

Based on Gunzinger’s analysis, “there is a sweet spot for munitions that have ranges between 65 miles and out to JASSM-ER’s range,” he said. Such mid-range weapons will “give penetrating aircraft enough standoff to avoid highest-risk point defenses surrounding high-value targets but won’t be so large that they can’t be carried internally by stealth aircraft.” Gunzinger has suggested in previous studies that USAF would find value in modifying some existing weapons with a propulsion pack to extend their range and keep attack aircraft at a greater distance from air defenses.