Skip to content
Media outlets visit one of the many impact sites created by the recent missile attacks at Al-Asad Air Base, Iraq, on Jan. 13, 2020. Army photo by Spc. Derek Mustard.
Expand Photo 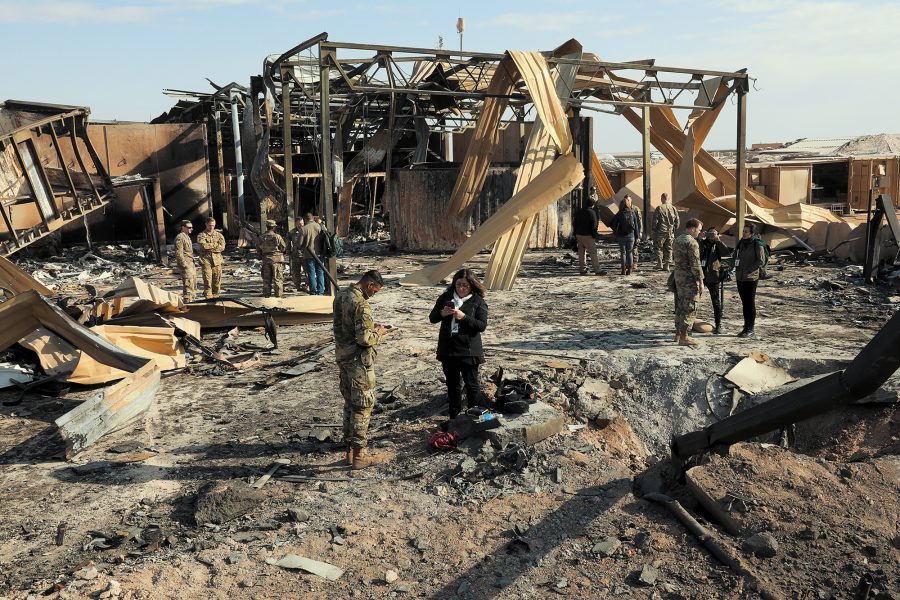 USAF Colonel on Night of Al-Asad Attack: ‘I Didn’t Believe Anyone Would Survive’

The 80 Airmen hunkered in bunkers on Jan. 7, 2020, wondering if they would live through the night. The sky glowed and the ground “shook with a force impossible to put into words,” as Iranian ballistic missiles rained down on al-Asad Air Base, Iraq.

Air Forces Central Command on April 7 published detailed recollections from more than 20 Airmen at al-Asad and other locations inside Iraq who survived the attack, launched to revenge the death of Quds Force leader Qassem Soleimani. No U.S. or Iraqi forces were killed in the attack, with American officials crediting intelligence and space-based surveillance with providing enough warning for the troops on the ground. However, more than 100 people received traumatic brain injuries in the attack, and vehicles, buildings, and equipment were damaged or destroyed.

Here’s what some of the Airmen said. The full AFCENT report is available here.

As commander, Coleman was informed of the potential attack and immediately needed to form a plan to keep the 160 personnel under her command safe. She decided to evacuate half of the personnel with much of the base’s aircraft, and keep half at the base to secure the airfield.

Coleman watched the planes leave, and headed to a bunker. At about 1 a.m., the missiles began, she said.

“I was being forced to gamble with my members’ lives by something I couldn’t control,” Coleman said. “I was deciding who would live and who would die. I honestly thought anyone remaining behind would perish. I didn’t believe anyone would survive a ballistic missile attack, and it made me feel sick and helpless.”

Maj. Johnathan Jordan, director of operations for the 443rd AES

Jordan was selected to lead the team evacuating the base. While leaving, he described feeling guilt for not staying behind, and anxiety for what the base would look like when he returned.

“Early the next morning, I received a message that everyone was OK and all accounted for,” he said. “Chills rushed through my body. We had survived. I rallied my team as we celebrated the good news.”

Selected to stay behind, Brown recalled entering the bunker with other members of the squadron. Intelligence said the attack window began at 11 p.m., and as time passed, he wondered if they would be OK. Then the strikes started.

“The next wave hits. Then the next, and the next. I have no idea if anyone is alive outside this bunker,” he said.

Team members realized early on that something big was happening, as the entire base “seemed to be bugging out.” The security forces at the base received an intel briefing confirming the expected attack, with either chemical, biological, or ballistic missiles inbound.

One anonymous SF member recalled getting a text ordering him to the squadron, and to bring a gas mask with filters. Some Airmen were leaving, but he was staying.

“I’m not going to lie, I was happy hearing I was posted,” he said. “If things were to pop off, I’d be right there on the front lines and that is what I signed the dotted line to do.”

Some SF members piled into an M-ATV to patrol the base, to check in with posts and other Airmen. At about 1 a.m., they got the “INCOMING, INCOMING, INCOMING” call and ran to the M-ATV for some cover. A missile hit about 100 meters away.

The team swept the base looking for casualties. A missile hit right next to a tower, and flames blocked the exit. Two soldiers in the tower were trying to evacuate through a small hole in the wall used for the tower’s .50 caliber gun. The security forces team used the M-ATV to slam over Hesco barriers and create a bridge to help the soldiers escape.

As the attack progressed, the team got word than an Army remotely piloted aircraft above was low on fuel and desperately needed to land. They surveilled the airfield and determined the best way for it to touch down.

The anonymous SF member recalled entering a bunker when the missiles hit.

“The sky lit up and we felt the shock wave as debris from the explosion pummeled our shelters,” he said. “My ears wouldn’t stop ringing. The next four hours became a blurred mix of emotions and chaos. Bomb after bomb shook us for what felt like all night.”

Sermons took cover in a bunker, and described an unrelenting onslaught of missiles.

“I kept thinking, ‘The next one is coming for us. I won’t be able to see my wife and kids again. My parents and brother. They’re going to be left on this Earth without me. I just want to hug them one more time.’”

Once able to leave the bunker after the missile attack ended, Sermons recalled seeing other Airmen and the feeling of relief when he heard there were no casualties.

“We will continue to pick up the pieces because the mission has to continue, but I will never forget that night for the rest of my life,” he said.