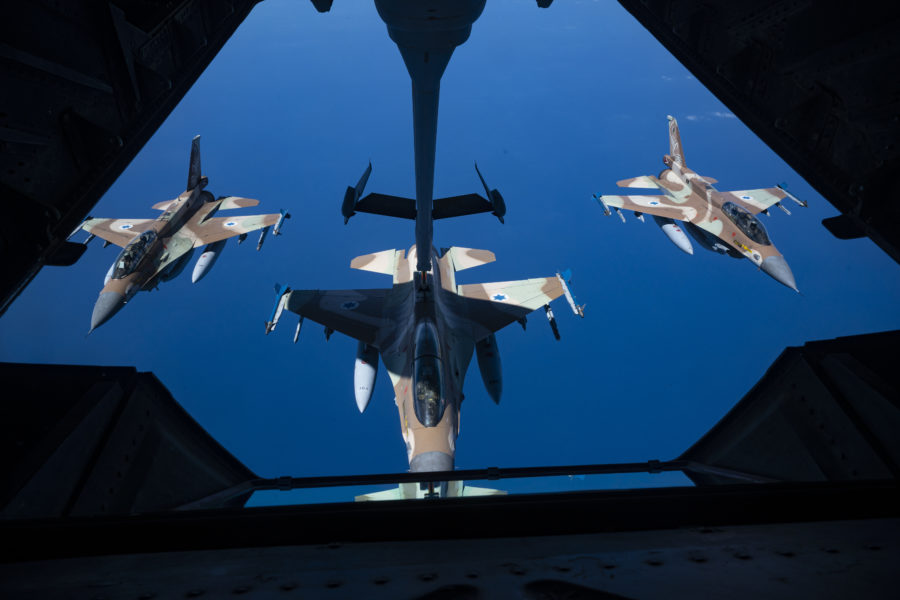 The U.S. and Israel kicked off a massive combined weeklong military exercise Jan. 23, the largest since Israel was moved to U.S. Central Command’s area of responsibility in 2021.

The exercise will run from Jan. 23-27 and involve 180,000 pounds of live munitions and 6,400 U.S. personnel, 450 of which will be on the ground in Israel. Operations will take place in Israel and the Eastern Mediterranean Sea.

The exercise “underscores our commitment to the Middle East,” CENTCOM commander Gen. Michael “Erik” Kurilla said in a statement.

“No country in the world can bring this level of combat power, with such agility into a region” that is not its primary focus, said Bradley Bowman, a former Army aviator and military expert at the Foundation for Defense of Democracies. “At the same time, it’s important for our adversaries and our allies, frankly, to know that and our partners and everyone in the region to know that.”

The drills mark a significant step towards integrating Israel with U.S. forces in the region. Until late 2021, Israel was considered part of U.S. European Command’s area of responsibility, a somewhat incongruous placement that limited the ability of the two nations to exercise together despite facing some common adversaries, such as Iran. The arrangement reflected older sensitivities among Arab states about cooperating militarily with Israel, but relations have warmed between Israel and some Arab states after the signing of the Abraham Accords.

Just a year and a half later, U.S and Israeli forces are conducting a significant exercise of capabilities that will be used in the Department of Defense’s ambitious Joint All-Domain Command and Control (JADC2) concept by practicing operations “on land, in the air, at sea, in space, and in cyberspace,” according to Kurilla.

“We are not leaving the region,” Bowman said. “Exercises like this demonstrate the truth of a sustained, persistent, and serious U.S. military presence in the region.”

In addition to its stealth fighters, the U.S. Air Force is sending four F-15E Strike Eagles and four F-16 Fighting Falcons, as well as Air Force Special Operations components such as an AC-130 gunship. Israel has 32 fixed-wing fighters participating.

The Space Force will also be represented in Juniper Oak, with low Earth and medium Earth orbit satellites under the control of the command’s new space component, SPACECENT.

The exercise takes place amid continued tensions in the region. Iranian-backed militias have launched drone and missile attacks against U.S. forces and allies—a drone attack took place Jan. 20 against the Al Tanf Garrison in southeast Syria, though the U.S. has not formally ascribed responsibility.

Iran has also alarmed the U.S. by providing drones to Russia for Moscow’s attacks in Ukraine and has exceeded the limits of the 2015 accord limiting its nuclear program. National Security Adviser Jake Sullivan traveled to Israel from Jan. 18 to Jan. 20 to discuss a range of issues, including Iran’s continued threats in the region, according to the White House.

In a statement, Kurilla said the exercise “enhances our ability to respond to contingencies.”

Juniper Oak will include 142 total aircraft, both fixed-wing and helicopters. The 100 American aircraft include:

All told, 7,580 personnel are participating, including 6,400 Americans, 450 of which are in Israel. Israeli forces involved in the drills number 1,180.