Skip to content
A view of the United Nations Secretariat Headquarters Building and the flags of U.N. member states Guatemala, Guinea, and Guinea-Bissau, taken from just outside the front gate on First Avenue in New York City. UN Photo by Manuel Elias.
Expand Photo 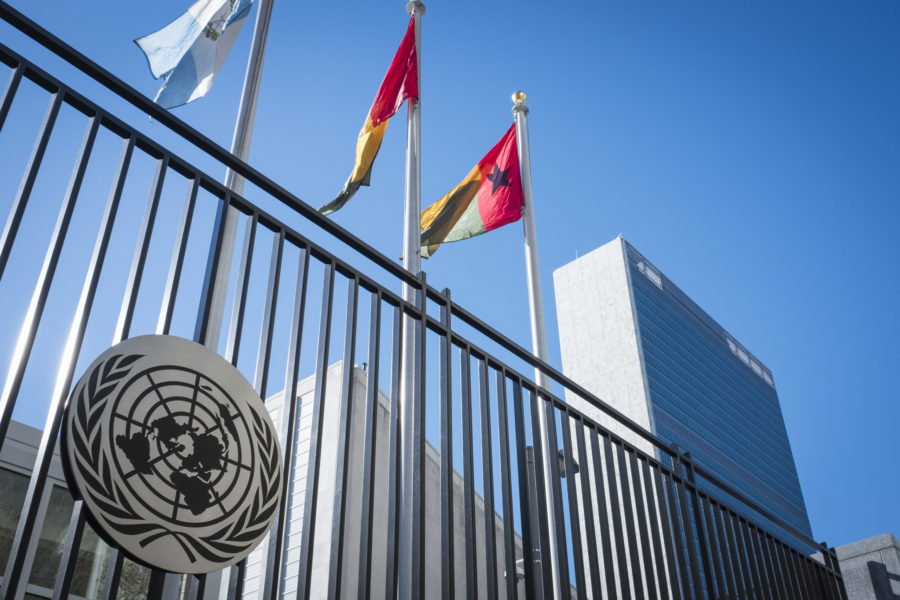 A United Nations panel overwhelmingly approved a resolution Nov. 1 to create a working group aimed at preventing an arms race in outer space, setting up the measure to pass in the General Assembly.

The resolution, introduced by the United Kingdom with the support of more than 30 other nations, including the U.S., would establish an open-ended working group that would “​​make recommendations on possible norms, rules and principles of responsible behaviors relating to threats by States to space systems.”

The measure was approved by the U.N.’s First Committee, which deals with disarmament and international security threats, in a landslide 163-8 vote, with nine abstentions. Those opposed included Russia, China, North Korea, Iran, Cuba, Nicaragua, Venezuela, and Syria.

The U.K. introduced the resolution Oct. 14 after its Permanent Representative to the U.N.’s Conference on Disarmament, Aidan Liddle, told the First Committee that the body “must look broadly at the behaviors, actions, and omissions that could lead to conflict, not only at capabilities or placement of weapons.”

The resolution echoes that language, saying the working group would “consider current and future threats by States to space systems, and actions, activities and omissions that could be considered irresponsible.”

U.S. civil and military officials, including Chief of Space Operations Gen. John W. “Jay” Raymond, have increasingly pressed for countries to adopt a basic set of norms and rules for operating in space. In April, Raymond compared the domain to the “Wild West.”

In July, Defense Secretary Lloyd J. Austin III signed a memo pledging the Pentagon to follow five “tenets of responsible behavior in space”—operating in space with “due regard” for others and in a professional manner, limiting the creation of space junk, avoiding harmful interference, maintaining separation and safe trajectories, and communicating to enhance safety and stability.

The U.S. has also introduced the Artemis Accords, a document that articulates principles for the peaceful exploration and use of the moon, Mars, comets, and asteroids, looking to build on the Outer Space Treaty of 1967.

However, Russia and China, two of the biggest global spenders on space programs, have not agreed to any set of norms nor the Artemis Accords.

That may change with the formation of the new working group. Michael Byers, co-director of the University of British Columbia’s Outer Space Institute, called a working group “the first step in treaty negotiations” during an Oct. 12 webinar. Byers is UBC’s Canada Research Chair in Global Politics and International Law and also a law professor at Duke University. He is among a number of experts who signed an open letter in September calling for a limited-scope treaty to ban kinetic anti-satellite weapon tests similar to past tests performed by the U.S., China, Russia, and India.

Also included in the U.K. resolution is a provision that “encourages those States that have not yet become parties to the international treaties governing the exploration and use of outer space to give consideration to ratifying or acceding to those treaties.”