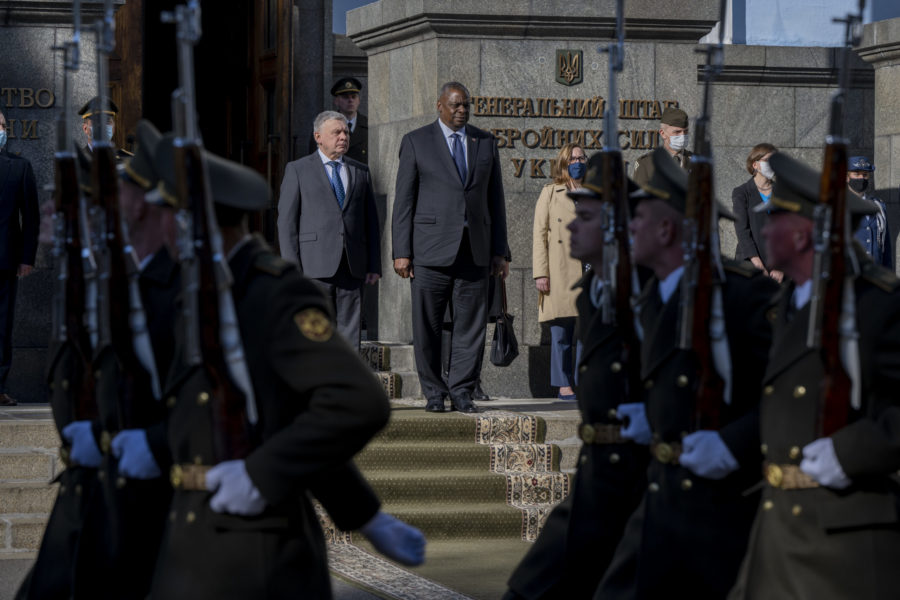 “I want to commend Ukraine’s brave men and women in uniform, who continue to stand up to defend our shared values and our core democratic principles,” Austin said at the Ukrainian Ministry of Defense, where DOD officials have helped the largest democracy in Eastern Europe strengthen its military institutions and doctrine.

“The United States calls on Russia to end its occupation of Crimea, to stop perpetuating the war in eastern Ukraine, to end its destabilizing activities in the Black Sea and along Ukraine’s border, and to halt its persistent cyberattacks and other malign activities against the United States and our allies and partners,” Austin added in comments following his meeting with Ukrainian Minister of Defense Andriy Taran.

Austin’s visit comes just a month after he met with Ukrainian President Volodymyr Zelensky at the Pentagon and signed a new defense cooperation agreement. During the visit, Zelensky said the agreement was too vague.

“This is just the direction, the framework,” he said in response to a question from Air Force Magazine during an event at Mount Vernon. “I need more substance.”

Ukraine watchers believe Biden is holding back defense assistance from Ukraine based on a belief by a high-level administration official that Putin could be swayed to help contain China.

“This isn’t Afghanistan, where we spent trillions of dollars for an army that evaporated right as we were leaving,” said Herbst, who currently serves as senior director of the Atlantic Council’s Eurasia Center. “This is a country which is able to defend itself against a much stronger foe, but [it] does need some help. So, why the hell wouldn’t we provide it?”

The Right Kind of Defense Assistance

The United States has provided Ukraine more than $2 billion in assistance since Russia invaded and annexed the Crimean Peninsula in 2014, but Ukraine watchers worry the assistance is not enough to stop another Russian invasion.

Ukraine was also part of the Defender Europe 21 exercises with NATO this summer, and it co-hosts two annual joint exercises with the United States, the situational and field training Exercise Rapid Trident and the Black Sea maritime Exercise Sea Breeze.

“The Russians are watching this visit closely, for sure,” Ukrainian security analyst and former diplomat Alexander Khara told Air Force Magazine by phone from Kyiv.

Khara noted the arrival of some 200,000 pounds of ammunition from the United States two days before Austin landed from Georgia, a sign that Ukraine is not alone in its war with Russia. But the analyst said much of Ukraine’s defenses were captured by Russia in Crimea, and the Russian troop buildup left most heavy equipment behind when it drew down forces. Vladimir Putin’s spokesman also recently said Ukraine joining NATO would be a “red line.”

“This administration is eager to have these predictable and stable relations with Russia,” Khara said of President Joe Biden’s stated goals with his Russian counterpart. “They are not going to irritate [Putin] by boosting support and military hardware, or with the integration vis a vis NATO.”

Herbst agrees that the U.S. policy toward Putin is deeply flawed.

“American assistance should be substantially larger than it is,” he said. “More military aid … and a clear threat of sanctions—major, major sanctions—if Moscow were to escalate its military engagement in Ukraine.”

Austin, in his public comments, highlighted the importance of the Black Sea region and strengthening Ukraine’s maritime domain awareness. Russia’s Black Sea Navy fleet has grown exponentially in recent years and increased harassment of international commercial and military vessels in the crowded body of water.

“The United States will continue to provide assistance to enhance the maritime capacities of not only Ukraine, but also Georgia, Romania, and Bulgaria,” Austin said, previewing his visit to Black Sea NATO ally Romania Oct. 20 before NATO defense ministerial meetings in Brussels Oct. 21-22. “We have long understood the importance of cooperation and unity among our allies and partners to deter Russian aggression.”

Khara said Russia has indicated it will act to prevent Ukraine from joining NATO, which could mean a full-scale invasion. Ukraine, he said, does not have the defenses in place to stop a Russian advance.

“We are just too vulnerable from the Russian air force that is encircling us,” Khara said, referring to Russian attack helicopter and fighter jet buildup in the occupied Crimean Peninsula, along the eastern border, and in neighboring Belarus.

“It’s not just air defense, but counter-artillery batteries and the means to stop the Russian advance by land as well,” he said.

In a September visit to Ukraine, Sen. Lindsey Graham (R-S.C.) called for more air defense support, and Rep. Scott Franklin (R-Fla.) introduced a Ukraine air defense amendment that was voted into the House’s draft version of the 2022 National Defense Authorization Act on Sept. 15. The amendment provides the possibility that the U.S. could finance an air defense system like Israel’s Iron Dome, which is jointly built by the Israeli defense company Rafael and Raytheon.

“There’s no question that air defense is a defensive weapon system, right?” he said when asked if such a system would be a provocation to Moscow. “All that does is makes it much more costly for Moscow to commit aggression from the air.”

Khara believes the United States is reluctant to provide the necessary defense materials to Ukraine because it believes Russia can still partner in containing China, which reportedly tested a nuclear-capable hypersonic weapon in August.

“They have some illusions that it’s possible to have them on their side in, let’s say, [the] competition race with China,” Khara said. “The Biden administration … has put on hold promotion of Ukraine into the NATO, as well as boosting military support to a level that Russia will be made to stop its aggression.”

Herbst agrees that a show of moderation to Putin will not yield favorable behavior.

“That’s a sucker’s argument,” he said. “A predictable relationship with Russia means we allow Russia to run roughshod over the security order established certainly after World War II.”

He added: “Moscow’s appetites, again, go beyond Ukraine and Georgia. It goes to the Baltic states against whom they regularly commit provocations. It goes to NATO and the EU, who they are regularly trying to weaken.”