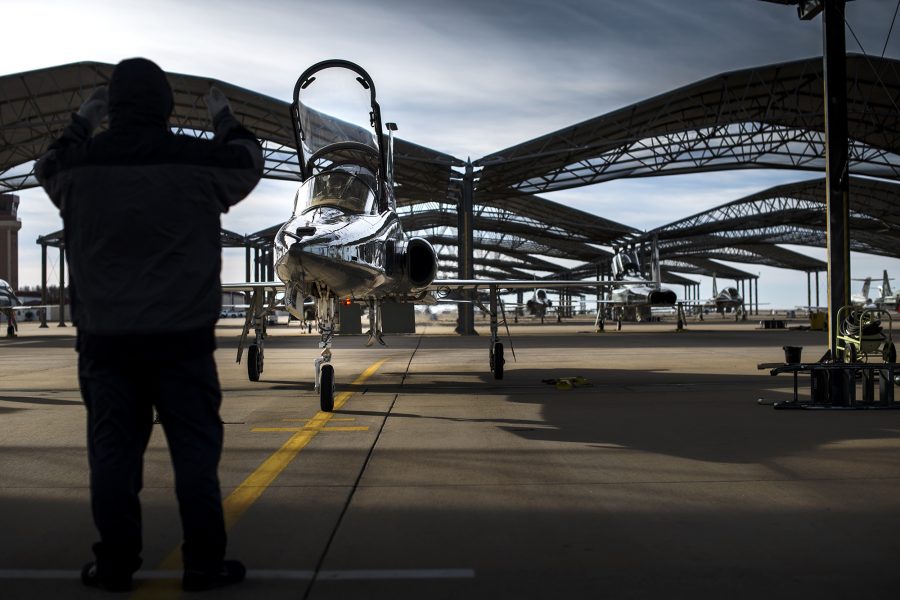 Two airmen at Vance AFB, Okla., were killed in a “mishap” during a routine training flight at the base.

Two T-38 training aircraft, each with two airmen inside, were performing a mission when the incident occurred during the “landing phase” of the flight around 9:10 a.m., 71st Flying Training Wing Commander Col. Corey Simmons said during a press conference at the base.

Video from local TV station KOCO shows one T-38 upside down on the side of the runway with its landing gear lowered, and another T-38 upright with the cockpit open further down the runway. The airmen in the other T-38 were not injured, Simmons said.

No additional details on the incident have been released, pending an official safety investigation into the mishap.

Vance emergency personnel responded to the scene to treat casualties and assist in recovery efforts, the base announced. The names of the airmen will be announced Nov. 22 after their next of kin have been notified.

“The biggest priority at this time is caring for the family and friends of our fallen,” Simmons said.

Vance is home to the 71st Flying Training Wing, which operates T-1s, T-6s, and T-38s for pilot training. The wing flies about 225 missions per day, with about four to five landings per day for each aircraft, Simmons said.

Flying operations have been halted at the Oklahoma base, and Simmons said he expects to make a decision on when to return aircraft to flight over the weekend. Base leadership is meeting with individual airmen to go over the process going forward following the fatal incident, so they “understand what to expect,” he said. “And just hug ‘em, spend as much time as we can comforting them. … This doesn’t happen often, there’s no textbook on how to handle this. So we’ll do our best to be fantastic human beings and airmen, who will put our arms around other airmen.”

The incident is the first in about a year for the T-38 fleet. Throughout the end of 2017 and much of 2018, there were five Talon crashes, killing two airmen. The last crash at Vance occurred in August 2018, in which the solo pilot was able to eject.

Editor’s note: This story was updated Nov. 21 at 7:30 p.m. Eastern with additional information.