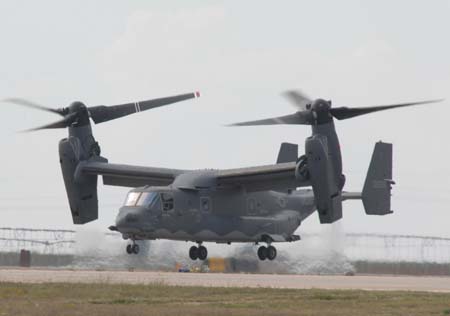 Air Force’s CV-22 appears to have performed quite well in its operational tests, opening the door for deployment of the tiltrotor aircraft before its formal combat-ready declaration next year. Reuters reported April 29, citing unnamed sources, that Lt. Gen. Donald Wurster, commander of Air Force Special Operations Command, told industry and military officials at a dinner April 28 that he was pleased with the performance of the CV-22 during its initial operational testing. The general said he wouldn’t hesitate to use the aircraft in combat now if they are needed, according to the wire service report. We’ve reported before that the Air Force has been mulling sending the CV-22 to theater in the fall. Further, when the Air Force Ospreys do go, they reportedly will carry a forward firing gun that the platform currently lacks. The Marines have been flying their version of the Osprey, the MV-22, in Iraq since October 2007. As of mid March, AFSOC had nine CV-22s in its possession, including four primary mission aircraft, one test asset, and four being used for training pilots. The Air Force plans to buy 50 CV-22s, which are built by a team of Bell and Boeing. The industry duo won a $10.4 billion multiyear contract in March to build 167 Ospreys, including 26 CV-22s, over the next five years. The CV-22s will replace USAF’s MH-53 helicopters, all of which will be retired by October.