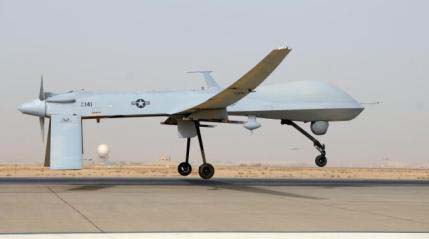 Air Force and Army leaders met at Langley AFB, Va., this week to discuss a new collaborative solution to the employment of unmanned aerial vehicles in combat. Gen. John Corley, Air Combat Command boss, Gen. William Wallace, head of the Army’s Training and Doctrine Command, and Lt. Gen. Michael Vane, who directs the Army Capabilities and Integration Center, discussed a new concept of operations that is the culmination of months of work by a joint Air Force-Army team looking at current and future UAV requirements. “As opposed to finding independent solutions, we are trying to find joint, collaborative solutions that best support the joint warfighter in any spectrum of war,” said Corley. Wallace agreed, saying that a joint effort would “allow us to rapidly develop force capabilities from concept … through employment by identifying, linking, and synchronizing all of our activities.” Corley noted, too, that key to the joint CONOPS is to think “about all the pieces” that make up UAV operations, “from training, to platform, to processing, exploitation, and dissemination” of information. The Air Force and Army were directed to work together on the Air Force Predator and Army Sky Warrior UAV programs, following a push by USAF to establish a single UAV executive agent. (Outgoing Air Force Chief of Staff Gen. Michael Moseley last year hailed the forced partnership as a step in “the right direction.”) One product of the June 30 Langley meeting was signing of a memorandum that formalized ongoing changes to employ UAV capabilities for battlefield support. Corley noted that “enhancements” to current operational doctrine had “already yielded benefits to the warfighter.” (Report by SSgt. Thomas Doscher and Carroll Kim)