The Home She Never Knew 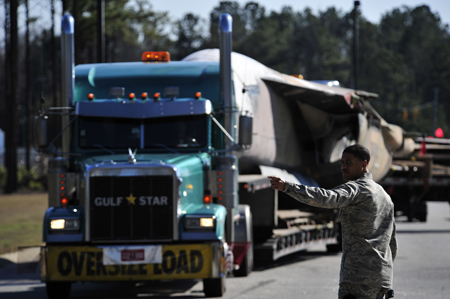 with its former unit in a new home, an F-111E Aardvark pulled from the boneyard at Davis-Monthan AFB, Ariz., arrived to Shaw AFB, S.C., home of the 20th Fighter Wing, for restoration and static display. “It was definitely a spectacle,” said SrA. Richard Townsend, a 20th Security Forces Squadron airman on gate security during the aircraft’s arrival earlier this month on two flat-bed trucks. “I’ve never seen anything like that come through here,” he added. Unpacking the airframe, technicians subsequently reattached the Aardvark’s wings and stabilizers, before several days of thorough wash-down in preparation for sheet metal repairs, 20th FW historian Arthur Sevigny told the Daily Report. Dubbed “The Baghdad Express,” technicians will paint the aircraft with the nose art it wore during Operation Desert Storm for its new display role. Serial number 68-0039 served with the wing during the unit’s days at RAF Upper Heyford, England. (Shaw report by MSgt. Cohen Young)