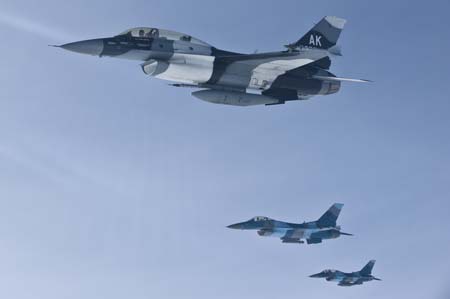 rt got an opportunity on June 10 to get an up close look of Red Flag-Alaska, watching the F-16s of the 18th Aggressor Squadron at Eielson Air Force Base doing their best to push the skills of US and allied pilots. The 18th AGRS is almost up to full strength, with 18 of its Block 30 F-16s now at Eielson, said Maj. David Michaud, assistant director of operations for the unit. The squadron is building toward a total of 22 or 23 F-16s in place over the next year, he said. Aside from the unit’s unique arctic paint scheme on some of its airplanes—in addition to the iconic blue Su-27 Flanker and lizard Flanker paint schemes—Michaud said the squadron’s tactics and training vary very little from the Air Force’s other two aggressor squadrons, the 64th AGRS and 65th AGRS at Nellis AFB, Nev. (The former flies F-16s, while the latter operates F-15s.) “From the ‘red air’ side, we are limited in our numbers in most cases,” Michaud said. On most any day of RF-A, the aggressors are flying 10 red aircraft and may be augmented by another unit drafted into the aggressor role, he said. Accordingly, aggressor pilots have to use simulated “regeneration airfields” out on the ranges when engaging friendlies to keep in the fight in sufficient numbers. This means that, when “killed” in the mock aerial combat, an aggressor pilot will fly down to low altitude to a designated spot, wait a moment and then fly back up to join the fight as if a new aircraft has entered the fray. Based on the exercise, the regeneration drill will change, Michaud said. Sometimes pilots won’t actually fly to a designated spot and some sorties may take longer for regeneration than others, he said.