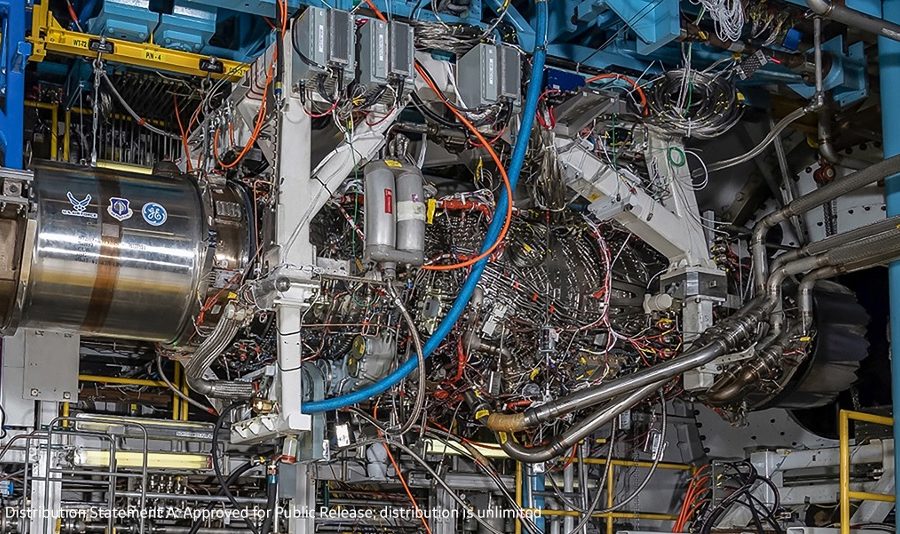 On March 26, 2007, the Air Force Research Laboratory (AFRL) publicly announced an effort to develop a new type of jet engine “that will enable pilots to switch from high speed combat maneuvers to long-range persistence mode as effortlessly as a bird in flight.”

That program was dubbed Adaptive Versatile Engine Technology, or ADVENT, and it was aimed squarely at pioneering the next generation of combat jet engines. Unlike the fixed, two-stream turbofan engines that had powered (and continue to power) the Air Force’s fighter fleets since the 1970s, ADVENT would seek to develop the technology necessary for a revolutionary three-stream adaptive cycle engine.

ADVENT proved the concept was feasible, leading the Air Force to move forward with industry on two more programs to further mature three-stream adaptive cycle engines. Almost exactly 15 years to the day after that first AFRL announcement, a flight-weight, adaptive cycle engine fired up for the first time in an Air Force test cell.

Engine manufacturer GE and the Air Force achieved the milestone on March 25 at Arnold Engineering Development Complex in Tennessee with GE’s XA100 engine. Ongoing tests there will be the most significant to date, with the goal of capturing engine performance data across the full flight envelope.

“It’s difficult to overstate just how important our collaboration with the Air Force has been throughout multiple adaptive engine programs,” says David Tweedie, GE’s general manager of Advanced Combat Engines. “It’s a joint success. The Air Force has been a true partner with GE the entire time.”

Tweedie says that the start of testing in an Air Force test cell is meaningful for several reasons.

GE’s XA100 engine translates to 30% more range for the Air Force’s F-35A, 20-40% faster acceleration, and double the power and thermal management capacity versus existing engines. GE’s engine is also designed to bring these performance impacts to the carrier-based F-35C with no structural modifications to the aircraft.

That performance Tweedie says, “simply cannot be matched by legacy propulsion systems,” and preserves the asymmetric advantage the U.S. has held in propulsion over its adversaries—a critical strategic advantage in an increasingly competitive global environment.

So, what’s next? Testing will continue in the coming months in the Air Force’s test cell as they work to gather performance data throughout the flight envelope, Tweedie says. Once the testing in completed there, GE is “ready to transition” to a low-risk Engineering and Manufacturing Development (EMD) program—the last step before a fielded product. With a Fiscal Year 2024 EMD start, production engines would be available in Fiscal Year 2028.

“There are no shortcuts in this business,” Tweedie adds. “The Air Force had the foresight 15 years ago to begin the process of fielding the next generation of jet engine. GE was all-in to help achieve that reality in 2007, and we’re here today, still all-in. We’re ready to get this engine into the hands of the Warfighter, and now is the time to make the decisions to provide this operational capability.”