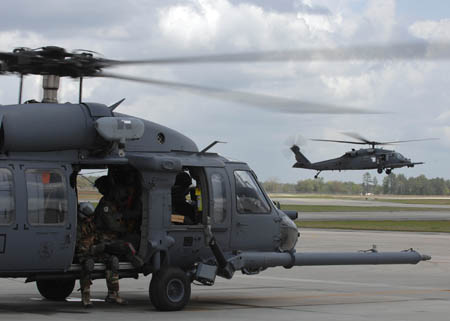 the 99 HH-60G Pave Hawk rescue helicopters in the Air Force’s fleet, only 93 are currently flyable, Maj. Gen. Robert Kane, director of global reach programs in the Air Force Secretariat, told lawmakers Tuesday. Further, “major structural cracks” have been found on 66 of those 99 helicopters and 47 of them have sustained battle damage in the last two years, he said in testimony before the House Armed Services Committee’s tacair panel. “These impacts have led to increased aircraft down time due to unscheduled depot maintenance,” at the same time that the Pave Hawk fleet is seeing “a significantly higher deployed utilization rate than over previous years,” he explained. To ease that burden, the Air Force is acquiring 13 UH-60M helicopters off of the Army’s production line and converting them to Pave Hawks. That will restore the fleet to its original complement of 112 airframes. Already the first two are in the fleet and the third is scheduled for delivery in May, according to Kane. Over the longer term, the Air Force intends to field the Combat Rescue Helicopter to replace the Pave Hawks, with initial operations eyed in 2018, said Kane. (Kane-Jones joint statement)