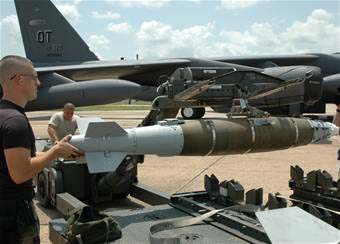 mber for the first time released a laser joint direct attack munition during a 17.3-hour roundtrip mission July 14 from Barksdale AFB, La., according to a July 24 release. The 76 B-52 bombers Air Combat Command intends to maintain (see above “First B-52H Heads to Barn”) are considered still vital for current operations and into the future, so have been receiving advanced targeting and precision weapons modifications. For the July 14 test, led by the 49th Test and Evaluation Squadron at Barksdale, the B-52 demonstrated its ability to intercept a moving target in the Pacific Ocean; a second test slated for the fall is to pit a LJDAM-carrying B-52 against a ground moving target. Maj. Steve Walden, 49th TES aircraft commander, said the “weapon released and performed as advertised.” (Barksdale report by Capt. Carrie Kessler)