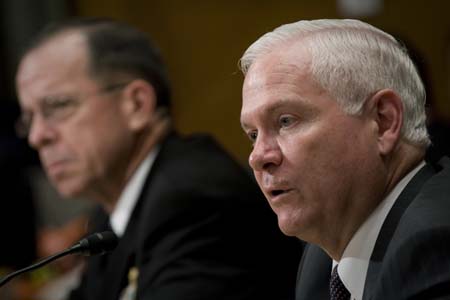 tes told members of the Senate Appropriations Committee’s defense panel yesterday that he is still mulling who will be in charge when the KC-X tanker competition is restarted later this year. Gates said he is in “the final decision process” to determine which organization—Air Force or Office of the Secretary of Defense—will be the acquisition authority for the multi-billion-dollar modernization effort. “I would expect to make the decision on the acquisition process within the next week or 10 days,” he said, noting that he wants a structure in place that will ensure “a fair, open, and transparent process.” He was less certain on when the draft request for proposals for the tanker will hit the streets, saying he didn’t expect it out this month and is “not entirely sure” about next month, either. OSD took over the lead in the KC-X program from the Air Force last summer after Boeing successfully challenged the Air Force’s original choice of Northrop Grumman’s KC-30 tanker over Boeing’s own KC-767 model. But Gates subsequently shelved the OSD-led plan to relaunch the tanker competition late last year and decided to wait for the new Administration, ultimately returning the problematic program to his own plate when he accepted President Obama’s invitation to stay on. Just last week Air Force Chief of Staff Gen. Norton Schwartz told House defense appropriators that the Air Force has strengthened its own KC-X oversight by increasing the seniority of the team assigned to it.