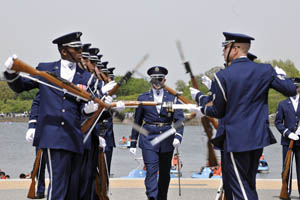 The Air Force’s honor guard won the hard-fought Joint Service Honor Guard Drill Competition at the Thomas Jefferson Memorial in Washington, D.C. “I think this was one of the best performances I’ve seen from our guys in the last two years,” said competition judge MSgt. Nathan Todd. USAF’s drill team beat out honor guards from the Army, Marine Corps, Navy, Coast Guard, and Merchant Marine during the April 14 competition, an annual event. Despite breaking a drill rifle midway through the team’s exhibition drill routine, “their bearing was not broken and their training propelled them to victory,” added Todd. “We trained for anywhere from eight to 12 hours a day specifically for this,” stressed honor guard member SrA. Christopher Martinez-Hernandez. “We put in a lot of hard work.” (Washington, D.C., report by A1C Daniel Burkhardt)