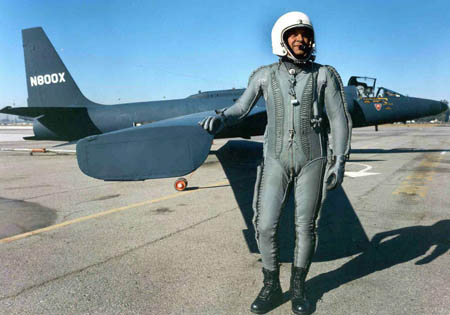 June 15, 2012, more than 50 years after downed U-2 pilot Francis Gary Powers returned from Soviet captivity, the Air Force will posthumously award him a Silver Star medal for his heroism. Chief of Staff Gen. Norton Schwartz will present the decoration to grandchildren of Powers during a ceremony in the Pentagon, said service officials June 5. Schwartz will honor Powers for demonstrating “exceptional loyalty” while enduring harsh interrogation in Lubyanka prison in Moscow during his 21 months of confinement that began on May 1, 1960. On that day, a Russian SA-2 surface-to-air missile shot down Powers’ U-2 airplane during a top-secret CIA-run reconnaissance mission over the Soviet Union. His shootdown and capture was one of the Cold War’s most memorable incidents. It heightened tension between the two superpowers and delivered Soviet Premier Nikita Khrushchev a propaganda coup. Despite faithfully serving his country and helping to gather invaluable intelligence on Soviet bomber and ICBM forces during several U-2 flights over Soviet territory prior to his shootdown, the nation never treated Powers as a hero until after his death. He died in August 1977 at age 47. Click here to continue on to the full article.