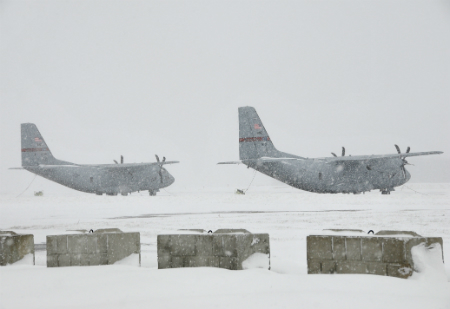 US Special Operations Command is taking on seven of the 21 C-27J transports that the Air Force is divesting, according to service spokeswoman Ann Stefanek. Deputy Defense Secretary Ash Carter made the decision on Oct. 28, Stefanek told the Daily Report on Nov. 1. Three C-27Js that are currently at Pope Field, N.C., are expected to transfer to SOCOM by the end of November, she said. SOCOM will then receive its remaining four C-27Js as they roll off of Alenia’s production line, she said. There’s no official word for how SOCOM will utilize these seven aircraft. In the past, SOCOM officials expressed interest in a gunship variant of the C-27J. The fate of the Air Force’s 14 remaining C-27Js remains unresolved at the moment, said Stefanek. If no other US military organization wants any of them, the Defense Department may declare them excess to need, opening the door to other federal agencies like the US Forest Service or Coast Guard. Stefanek said all but one of those 14 airframes are already in Type 1000 storage, meaning near-flyaway status, at the Air Force’s retired aircraft boneyard at Davis-Monthan AFB, Ariz. The remaining airframe has come off of the production line and is set to move to the boneyard unless a new operator is identified for it beforehand. (See also Boneyard Queens or Still Life in Those Wings and Meanwhile at Farnborough.)