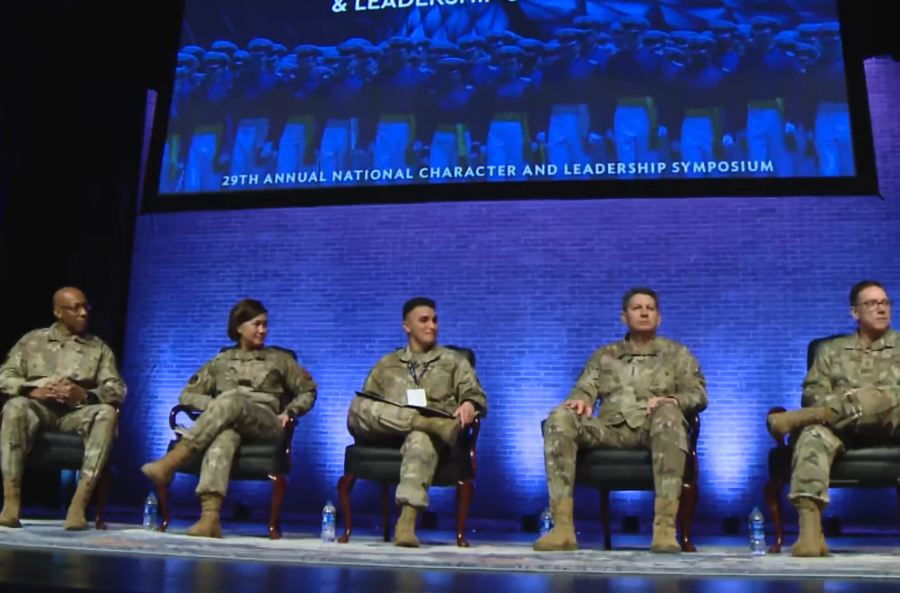 Senior Leaders’ Career Advice on How to ‘Be Ready’

Four of the top officers and enlisted leaders from the Department of the Air Force answered cadets’ questions on the core topic of “Ethics and Respect for Human Dignity.” The yearly conference, held Feb. 25, exposes cadets to diverse perspectives from inside and outside the Air Force and Space Force.

Some of their insights:

Motivation out of failure: After reporting to Kunsan Air Base, South Korea, for his first operational assignment as an F-16 pilot, Brown failed his “check ride.”

“You might imagine the impression you leave as you come into your new squadron as a brand-new lieutenant and failing the check ride,” Brown said. “And then I did the recheck. I passed, but I got some additional training because I didn’t quite make it all the way. And it was a motivator to me, for me to actually take a hard look at myself. … It’s not so much that you failed, but how you respond to the failure. It’s the attitude that you have. And I have a pretty positive attitude about a lot of things, and I was able to bounce back.”

Freedom to disagree: Brown said he encourages people to speak up when they disagree with him because, “I really believe iron sharpens iron.”

“I disagree with people all the time,” Brown said. “Sometimes as a leader, you really want to bring in those that disagree with you—because if you don’t, and you surround yourself with everybody who agrees with you, you’re going to have a blind spot. So I actually look for disagreement.

Winning with diversity: When Bass looks to learn lessons from high-performing teams, she recognizes that “all of them value the diversity and the strengths and the talents for every single team member that’s on it.

“So as you’re getting ready to go out there and as you’re, you know, leading in the capacity that lieutenants might lead … I would offer: Go out there and know your folks and look at the talent and the strengths and the diversity that those folks bring to the team, and then consider those things.”

Creating opportunities to connect with Airmen: Whereas Brown sets up breakfasts and brown-bag lunches to meet with troops where he travels, Bass likes to drop in unannounced:

“It’s about listening to your folks and providing opportunities to do that,” Bass said. “I love to just go in and visit places where they aren’t expecting me to be there and I’ll just cold pop in and be real and really ask, you know, what are some of the challenges you guys are going through—and also kind of humanizing myself.”

Focusing on today to be ready for tomorrow: When Thompson was a cadet at the Air Force Academy, he suspects he and the rest of his cadet squadron would have been “concerned” to discover the extent the country has now put the Air Force’s and Space Force’s “leadership in our hands.” He joked—but not entirely.

“And so what I would encourage all of you to do is: First, understand what your goals are—short-term goals, medium-term goals, and long-term goals. Understand what they look like. Think about the milestones and paths that you need to get there. But then don’t worry about them too much …

“Don’t worry about the job you didn’t get. Don’t worry about your next job. Worry about what you’re doing today and what you need to do to prepare yourself for the future, and I assure you when that day comes—when somebody out there is sitting in this chair or that chair,” Thompson said pointing to his and Brown’s, “you’ll be ready.”

Chief Master Sergeant of the Space Force Roger A. Towberman on:

Getting input from everyone on the team: Whereas he supposes at one time “maybe leaders were best served by knowing the answers, I don’t think that time is now.

“I think leaders now ask questions,” Towberman said. “Knowledge is all around you on that diverse team, and drawing that out—drawing those answers out—is probably the most important thing that you can do for the team.

“And you can’t listen to everyone if you don’t pay attention to who’s maybe not voluntarily providing input and then drawing it out of them. There’s always going to be the person happy to give you a thought. If you’re really going to make your team effective, you’ve got to get thoughts from everyone.

“A diverse team is great—an inclusive team is what wins. And you’re inclusive when you get that input from everyone.”

Working through the ethical dilemma of what it means to kill: The military’s very existence poses an ethical dilemma, Towberman said, and being ready could come down to facing that fact upfront.

“We’re in the business of killing people, which we don’t think is OK, right?” Towberman said. “And I’ve had many instances in my career where seconds after I made a radio call, I knew someone was going to die. And they did. And I always, myself, knew that that was about saving lives and that there was a choice that needed to be made. But I’ll tell you, I never scrambled after the mission to find the video so I could high-five everyone over a life that was lost.