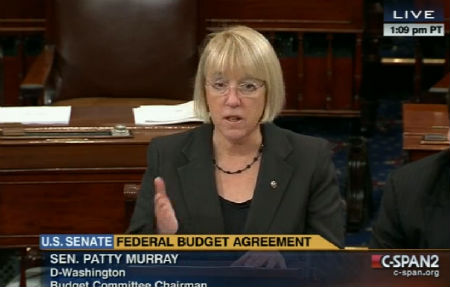 The Senate passed a two-year budget deal by a vote of 64-36 Wednesday evening. The bill, assembled by Senate Budget Committee Chairwoman Sen. Patty Murray (D-Wash.) and House Budget Committee Chair Rep. Paul Ryan (R-Wisc.), passed the House last week and now heads to the White House for President Obama’s signature. The agreement, which includes $520.5 billion in defense discretionary spending in Fiscal 2014, helps break through the partisan gridlock that has led to constant crisis and even a government shutdown, and shows Congress “can function when Democrats and Republicans work together to make some compromises for the good of the country,” Murray said on the Senate floor Wednesday. Ryan, in a statement Wednesday, said the agreement is a sign both houses and parties can work together. “This bill is only a small step. We need to do a lot more, but it’s a small step in the right direction.” President Obama thanked Congress for looking beyond partisan politics and passing the budget, saying he hopes the “spirit of cooperation” will continue into the new year. “All told, it’s a good first step away from the shortsighted, crisis-driven decision-making that has only served to act as a drag on our economy,” said Obama in a Dec. 18 statement. The Senate is expected to take up the pending defense authorization bill on Thursday. (Murray statement and link to budget)