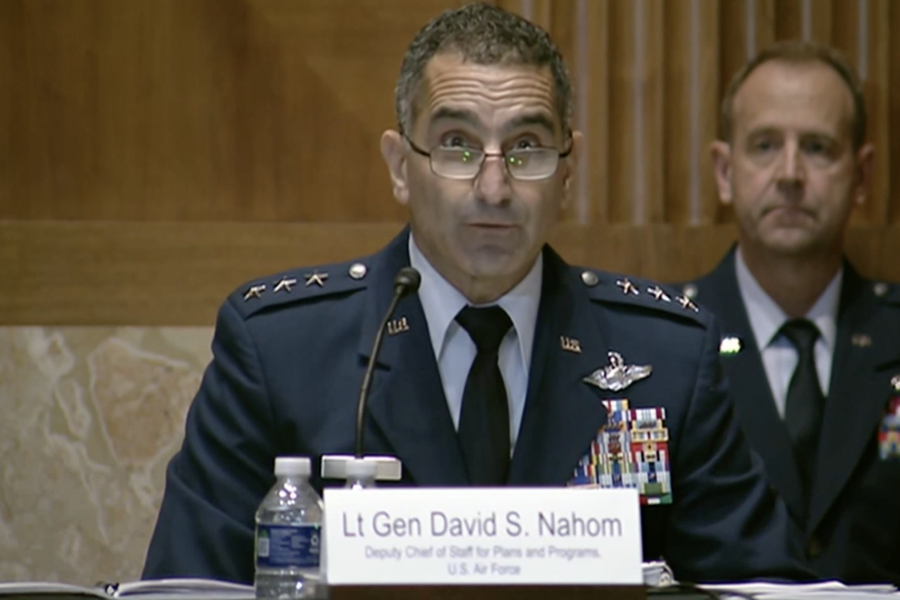 The successor to the RQ-4 Global Hawk should be available for service late in this decade, Lt. Gen. David S. Nahom, Air Force deputy chief of staff for plans and programs, told the Senate Appropriations Committee on July 21.

Answering questions on divestitures of systems the Air Force wants to make in order to free up funds for new technologies, Nahom said the Block 40 Global Hawk fleet is no longer survivable against modern air defenses and that its replacement is coming, but not swiftly.

At “the speeds it flies, the altitudes it flies, and the makeup of the aircraft, it’s just not survivable in these contested environments that we’re going to be looking to gather intelligence from in the future,” Nahom said of the Block 40 Global Hawk. But “we rely on it” to meet the Ground Moving Target Indicator mission, along with the E-8 Joint STARS, he told Sen. Richard Shelby (R-Ala.). He noted that the Air Force is starting to retire the E-8s due to their advanced age.

“The Block 40s will be very critical in the next six, seven, eight years, while we go to the ‘what next,’” Nahom said. He deferred further discussion of the follow-on capability to a closed, classified session.

Likewise, Nahom said the MQ-9 Reaper, “as … incredible as it is,” particularly in the Middle East, “is not survivable. It was never designed for what we foresee … in the South China Sea.”

With about 300 MQ-9 aircraft, the Air Force has enough, he said, and will re-jigger how they are organized to save some money on manpower and contract operations. Nahom said it’s “appropriate” to do so now that the U.S. is reducing its footprint in the Middle East.

Asked what will replace the MQ-9, Nahom again said the details are secret.

The Air Force is “bringing on … a family of systems” for intelligence, surveillance, and reconnaissance, Nahom said, reiterating, “I’ll have to come back in classified session to talk about that more.”

The Air Force has said it will upgrade some of the MQ-9 fleet with Link 16 datalinks, increased electrical power, longer wings, and new electro-optical systems, as well as an open architecture to rapidly upgrade its capabilities. The service has declined to say whether the upgraded MQ-9s, to be called the MQ-9 Multi-Domain Operations (M2DO) aircraft, will have an electronic warfare mission, given the increased power generation capability.

The 300 extant aircraft are “enough to take us into the mid-2030s,” Nahom said. “We are not reducing the size of the squadrons, or manpower out of those squadrons. What we’re asking is to reduce some of the combat lines in the manner we’ve been flying them in the Middle East.” As they are flown now, “we operate it in a very manpower-intensive way. So we’re looking to reduce some of the combat lines and operate that aircraft a little differently,” he said, without providing details. “We’re not taking any crews out” of the MQ-9 system, he added, and USAF will “transition smartly” to whatever replaces the Reaper.

The aircraft will be used “in competition” with peer enemies but in “places around the world” that are less threatening to the non-stealthy airplanes.

Nahom said he’s “always concerned with what we divest, because I know what the combatant commanders and our Airmen need around the world.” He said he’s “very concerned with readiness,” acknowledging, “We’re not investing in readiness, right now.” The Air Force’s 2022 budget shows stepdowns in funding for flying hours as well as weapon system sustainment, along with other readiness accounts.

Instead, the Air Force is putting its divestiture savings toward new systems, and Nahom said he understood it can be a hard sell because “some of these things are not going to be in service for 10, 12 years, and we’ve got to make sure we continue the investment so they do arrive,” specifically mentioning the B-21 and Next-Generation Air Dominance fighter.

The B-21 will be “critical to our national defense. And we cannot do what we did with the B-2 and only buy 20 of them. We’ve got to make sure that we stay invested, and that is a concern,” he said.

Nahom said he is often asked if the 2018 National Defense Strategy got it “right,” and he said his answer is, “yes, but …”

“I would say the threat has accelerated much more than we would have thought back in 2018,” he asserted.

Shelby responded that in his opinion, China is a greater threat than Russia was during the Cold War because, “The Chinese have the economic base that the Soviet Union never had.”

Nahom replied that while the threat can seem overwhelming, the U.S. has its own advantages, mainly in alliances and partnerships that Russia and China do not have.