Skip to content
The newest members of the U.S. Space Force are sworn in during a livestreamed ceremony from the Air Force Institute of Technology at Wright-Patterson Air Force Base, Ohio, shown here, and Maxwell Air Force Base, Ala., on Feb. 2, 2021. U.S. Air Force photo by Ty Greenlees.
Expand Photo 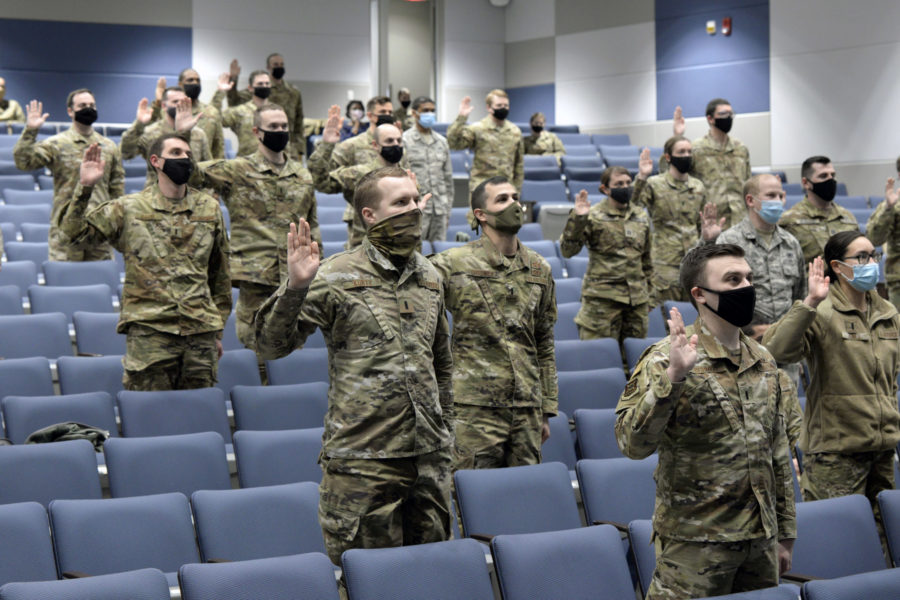 The Space Component would merge full- and part-time Guardians into one component. How it might incorporate existing Air National Guard space troops remained up for debate.

Raymond implied before the House Armed Services Committee that the hybrid component structure would benefit Guardians and their families based on knowledge gleaned from two years of overhauling “how we recruit, assess, train, develop, promote, employ, and take care of our Guardians.”

Describing the plan as “bold and transformational,” he said the hybrid structure is the service’s “No. 1 legislative proposal.”

Mulcahy explained that the service needs to compete for talent “with the well paid and dynamic space industry.” The leaders hope to achieve more individual flexibility through the hybrid structure.

“This approach could ensure our members do not have to choose between their military careers and their personal lives by encouraging continued participation,” Mulcahy told the SASC’s subcommittee on personnel April 27. This Space Component would extend the continuum of service and enable us to recruit and retain the exquisite, highly technical force we need in an efficient and effective and fiscally sound manner.”

“I don’t care if you’re in acquisition—you cannot acquire things well if you don’t understand the tech that you’re buying, right?” Costa told reporters at the Space Symposium in Colorado Springs, Colo., on April 5.

Her office, focused on “asymmetric, disruptive technology,” oversees the Space Force’s University Partnership Program, which exists in part to recruit future Guardians with degrees in science, technology, engineering, and math. The office also set up the service’s Digital University, which offers about 23,000 higher ed courses from contracted vendors, to “help make everyone more digitally fluent,” Costa said. Students can take sets of courses that add up to “microdegrees.”

The flexible structure of the Space Component could help the service retain some of that expertise, Mulcahy said.

Raymond said the service is still evaluating, as instructed in the fiscal 2022 National Defense Authorization Act, options for whether or how it will incorporate existing space-oriented Air National Guard units into the Space Force.

He laid out possibilities for what could happen to the existing “836-or-so” members of Guard space units:

Rep. Salud Carbajal (D-Calif.) spoke for the units, such as the California Air National Guard’s 148th Space Operations Squadron based out of Vandenberg Space Force Base that provides satellite command and control for military satellite communications. Carbajal said the Guard units would like to be brought into the Space Force’s fold.

“My understanding is they’re not the only National Guard unit around the nation” that wants to do so, Carbajal said.