Skip to content
Remains of a Russian missile Ukrainian forces reportedly shot down in the southern region of the country on Nov. 15, 2022. Photo from the General Staff of the Armed Forces of Ukraine via Facebook.
Expand Photo 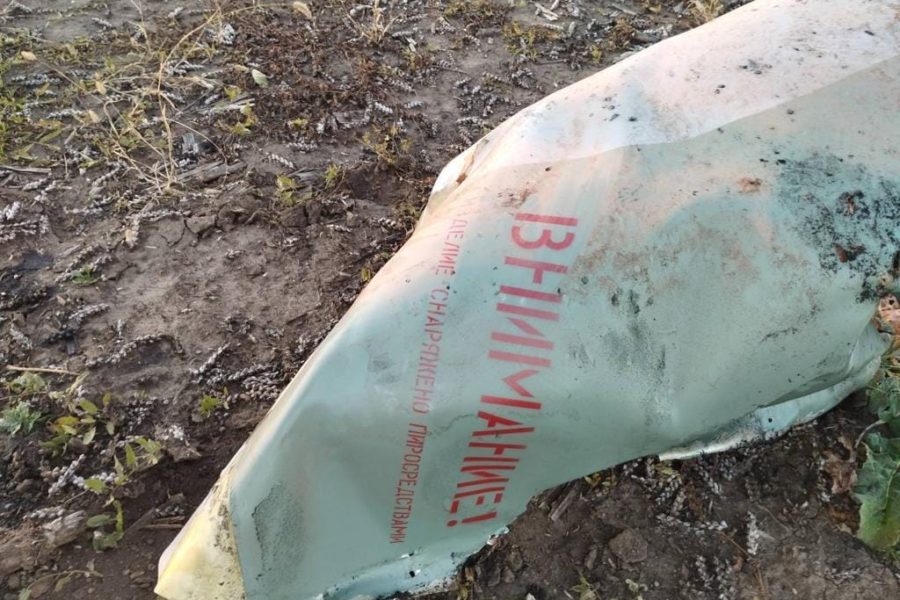 For months now, Ukraine has faced a barrage of Russian missile and drone attacks, straining its Soviet-era air defenses. But as the U.S. and its allies work to provide Ukraine with upgraded technology to defend against those strikes, an open-source intelligence analysis has found the Russian missiles have plenty of U.S. technology of their own.

In a Jan. 10 briefing, analysts from the Royal Institute of Strategic Studies, detailed how many of Russia’s missiles have American and other Western components, despite export controls in place.

“All of these pieces of equipment were absolutely filled with Western components,” James Byrne, the Director of the Open Source Intelligence and Analysis Research Group at RUSI, said. “For us, it’s very interesting, very surprising. Nearly everything that we found in those systems was manufactured, designed by American companies.”

Bryne said RUSI was able to conduct its extensive assessments in part because Ukraine has offered up weapons it has shot down, captured, or collected the wreckage of, for inspection by analysts.

Byrne said the two largest suppliers of tech it found in Russian weapons were the U.S.-based Analog Devices and Texas Instruments—much of that technology has non-military applications, making a crackdown on their export harder. And according to the British think tank, Russia has various schemes to smuggle technology into the country, including front companies in third countries.

The U.S. has put in place expansive export controls to prevent American technology and goods from heading to Russia since Moscow’s renewed invasion begin in February 2022. That’s on top of other steps the U.S. took after the original Russian invasion of Ukraine in 2014, including the strengthening of export controls on weapons technology.

However, according to RUSI, some of the weapons used by Russia in Ukraine have been made in the past year.

“It’s always been the case that there was a huge interest in acquiring American technology,” Byrne said. “Despite Russian efforts to sort of build this sort of domestic homegrown semiconductor industry, despite the propaganda, despite the discussion about import substitution, they haven’t succeeded in doing that. I personally don’t think they will ever really be able to succeed in doing that. And so it leaves them really critically dependent on foreign technology.”

The Department of Commerce did not immediately reply to a request for comment from Air & Space Forces Magazine on the effectiveness of U.S. export controls.

As Russia has continued to pummel Ukrainian infrastructure this winter, the U.S. and its allies have sought to provide Ukraine with an integrated, modern air and missile defense network. Most recently, both the U.S. and Germany have pledged to give the Ukrainians one of its more advanced systems: the PATRIOT air defense system.

On Jan. 10, Pentagon press secretary Brig. Gen. Patrick S. Ryder announced that Ukrainian soldiers will begin training to operate the PATRIOT at Fort Sill, the same place American troops are trained on the system, as soon as next week.

Doing so will require Ukraine to pull some troops off the front lines; Training on a U.S. PATRIOT battery takes several months, though it could be expedited by skipping some steps deemed nonessential.

“The longer those troops are off the line, they’re not actually engaged in combat, and so [we’re] trying to work with the Ukrainians to see what we can do to accelerate the training timeline,” Ryder said. “In terms of what that training will look like, it will consist of training in the classrooms, it will consist of training on the PATRIOT systems, and then of course, in a simulation lab as well before they actually deploy the capability on the battlefield.”

Ryder said Ukraine plans to send soldiers already trained in air defense to Fort Sill, where the Ukrainian troops will be instructed by the same teachers used for U.S. and allied troops who operate the system. Around 90 Ukrainians will be trained, which is the same number of troops the U.S. uses to operate its PATRIOT batteries.

Ryder also stressed the importance of not cutting too many corners in the training process, citing lessons learned from watching the Russians struggle with combined arms maneuvers due to poor training and techniques, leaving their advanced equipment less useful.

“My understanding is that nothing will be done that would prevent this from being employed to the maximum, most effective way possible,” Ryder said. “If give you a piece of equipment, I’m simply giving you a piece of equipment, but if I give you the equipment and I give you the training, I now give you a capability. So that’s really essential here to ensuring that not only do the Ukrainians have the equipment they need to fight, but also the training that’s going to enable them to operate it on the frontline.”