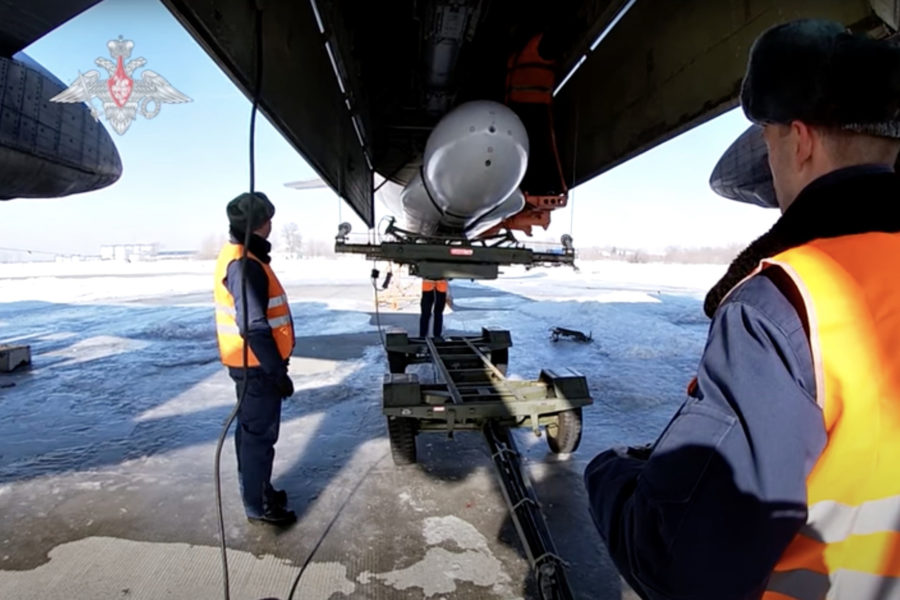 More than 160 Russian mid-range ballistic and Caliber cruise missiles hit Ukrainian military targets across the country on Feb. 24 after Russian President Vladimir Putin declared Russia was launching a “special military operation” in Ukraine, and a senior U.S. defense official assessed that Russia’s intention is to “decapitate” Ukrainian leadership and install a pro-Russia government.

Before dawn, Russia began a three-pronged land invasion and air attack from positions in Russia, Belarus, and occupied Crimea. Putin’s forces seized control of the Chernobyl nuclear power station and continue a seize on the capital of Kyiv.

“It’s our assessment that they have every intention of basically decapitating the government and installing their own method of governance,” a senior defense official told Pentagon reporters. “We have seen indications that they are resisting and fighting back.”

The Defense Department official described a Russian siege from the Crimean peninsula to the Ukrainian city of Kherson; and several advances from northern positions inside Belarus, two lines approaching Kyiv from the northwest and northeast; and another line from northeast Ukraine to the second largest city, Kharkov, where the heaviest fighting is taking place and Ukraine claims to have destroyed four Russian tanks.

A report from the General Staff of the Ukrainian Armed Forces confirmed that Russia landed 20 KA-52 and Mi-8 helicopters at the Anatov airstrip some 20 miles northwest of Kyiv. Russia made similar successful landings in the southwest near Moldova and north of Crimea.

Ukraine’s Joint Forces Operation, which is responsible for defending the Donbas area in the east, reported that it was able to repel a mechanized incursion, destroy five armored personnel carriers and a military vehicle, repel enemy tanks, and take Russian hostages. A Russian KA-52 helicopter was also shot down north of Kyiv.

The senior defense official said that 75 Russian heavy and medium-sized fixed wing bombers had been detected in the air over Ukraine.

The Defense Department estimated Russia had attacked 10 Ukrainian air bases. Nonetheless, a Ukrainian defense official told Air Force Magazine the air bases remained under government control, including the air base closest to Kyiv where Russia made a successful landing.

“Antonov airfield is under Ukraine control,” the official insisted.

U.S. President Joe Biden in a statement shortly after the start of the attack promised “further consequences” and a “strong, united” NATO response, as U.S. and NATO leaders condemned Moscow’s actions.

Members of the G7 group of global leaders met early Feb. 24 and Biden addressed the nation from the White House shortly after 1:30 p.m. calling the Russian incursion “a brutal assault on the people of Ukraine without provocation, without justification, without necessity.”

“President Putin has chosen a premeditated war that will bring a catastrophic loss of life and human suffering,” Biden said in his initial statement. “Russia alone is responsible for the death and destruction this attack will bring, and the United States and its allies and partners will respond in a united and decisive way.”

Biden promised continued support and assistance to Ukraine and the Ukrainian people.

Putin’s blunt video address released at the start of the invasion promised the “demilitarization and denazification of Ukraine” and warned: “Anyone who tries to interfere with us, or even more so, to create threats for our country and our people, must know that Russia’s answer will be immediate and will lead you to such consequences as you have never before experienced in your history.”

“The world must act immediately. Future of Europe & the world is at stake,” Kuleba wrote on Twitter after the attack began. Kuleba called on nations to impose sanctions and bar Russia from the SWIFT financial system, to isolate Russia, and provide Ukraine with more weapons, fuel, and more financial and humanitarian assistance.

Several European nations have resisted the SWIFT option thus far, fearing that Russia would use that as an excuse to default on Western debts.

In the past year, the United States has provided $650 million in defense assistance to Ukraine, including lethal weapons like anti-tank javelins and ammunition. The United States also approved third-party transfers of American-made weapons, including air defense Stingers, which are ineffective against Russian combat jets.

“What Mr. Putin is trying to get to is essentially a rewrite of the security architecture, and arrangements in Eastern Europe,” he said. “If you really look at it closely, it’s a fairly brazen attempt to re-establish the border nations, Russian control over the border nations, and setting up an architecture very similar to the Warsaw Pact or pre-fall of the wall.”

In the February 2014 Revolution of Dignity, Ukrainians rejected pro-Russian leader Viktor Yanukovych and overthrew his government in favor of a pro-European government that later adopted in its constitution goals to join NATO and the European Union.

Putin has claimed Ukraine’s ambition to join NATO posed a national security threat to Russia and began amassing up to 190,000 troops along Ukraine’s borders under the guise of military exercises that were supposed to end Feb. 20.

After several failed “false flag” operations revealed by Biden administration officials in de-classified intelligence as an attempt to prompt an invasion, Putin claimed without evidence that ethnic Russians in the disputed Donbas region were suffering “genocide” at the hands of the Ukrainian government.

Putin recognized the breakaway republics of Donetsk and Luhansk in southeastern Ukraine Feb. 21 and moved in forces that he referred to as “peacekeepers.”

In response, Biden ordered additional U.S. forces to the eastern flank of NATO to protect the former Soviet and Warsaw Pact countries that now form Democratic members of the 30-member security alliance.

Biden on Feb. 22 ordered a repositioning of forces in Europe to include six F-35s operating out of Germany to Lithuania, Estonia, and Romania on the NATO eastern flank. In addition, an infantry battalion task force of approximately 800 personnel will move from Italy to the Baltics; an attack aviation battalion of 20 AH-64 helicopters from Germany to the Baltic region; and an attack aviation task force of 12 AH-64 helicopters will move from Greece to Poland.

Earlier, Biden deployed a total of 24 F-15s and F-16s to Poland and Romania for NATO enhanced Air Policing missions, Army Stryker units deployed to Romania, and a planned Stryker deployment to Bulgaria and Hungary. In addition, 4,700 troops from the 82nd Airborne Division deployed to Poland.

Still, Russia held back much of its capability, a senior defense official told reporters in a Pentagon briefing.

“We don’t believe that the Russians have employed the full scope of their electronic warfare capabilities, and it’s not clear exactly why,” the official said. Meanwhile, the push by Russian airborne troops continued to threaten the capital. “We do think they have in just the intervening hours they have gotten closer to Kyiv.”