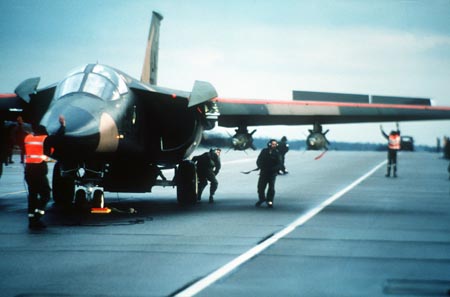 Twenty-five years ago on April 15, Air Force and Navy strike aircraft dealt a blow to Libyan dictator Muammar’ Qaddafi’s arrogance and overt support of terrorism. While a force of F-111s from RAF Lakenheath, Britain, (taking off on April 14, 1986) struck targets in Tripoli, including Qaddafi’s headquarters, Navy strike aircraft from the Sixth Fleet pounded sites in Benghazi. A host of USAF and Navy platforms supported the mission, which President Reagan ordered after a string of deadly terrorist attacks were traced back to Qaddafi’s regime. The raid came at a cost. Capt. Paul F. Lorence and Capt. Fernando L. Ribas-Dominicci were killed when their F-111 went down, presumably to hostile fire. Noted Air Force author Walter Boyne, in his March 1999 Air Force Magazine article on the raid, said the mission pushed USAF crews and aircraft “to the absolute limits of their capability. Yet they prevailed, destroying key targets and shocking Qaddafi.” Fast forward 25 years. Air Force aircraft are once again flying over Libya to deal with his misdeeds, this time against his own people.