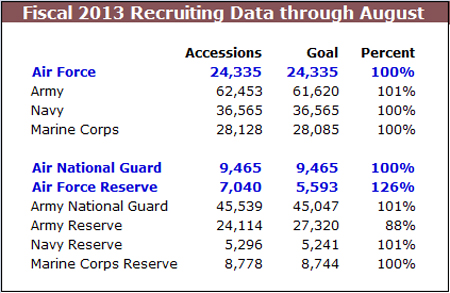 The Air Force’s recruiting numbers remained strong for Fiscal 2013 through August, according to the Pentagon’s newest recruiting statistics. The Active Duty component met its target through the 11th month of the fiscal year by bringing in 24,335 accessions, states the Defense Department’s Sept. 25 release. The Air National Guard also matched its goal by accepting 9,465 accessions. Far surpassing its fiscal-year-to-date target was the Air Force Reserve, which took on 7,040 accessions, 126 percent of its goal of 5,593, according to the release. Across the sister services, only the Army Reserve did not meet or exceed its numerical accessions goal through August. It brought in 24,114 accessions, 3,206 short of its target of 27,320. (See also our coverage of July’s recruiting numbers.)