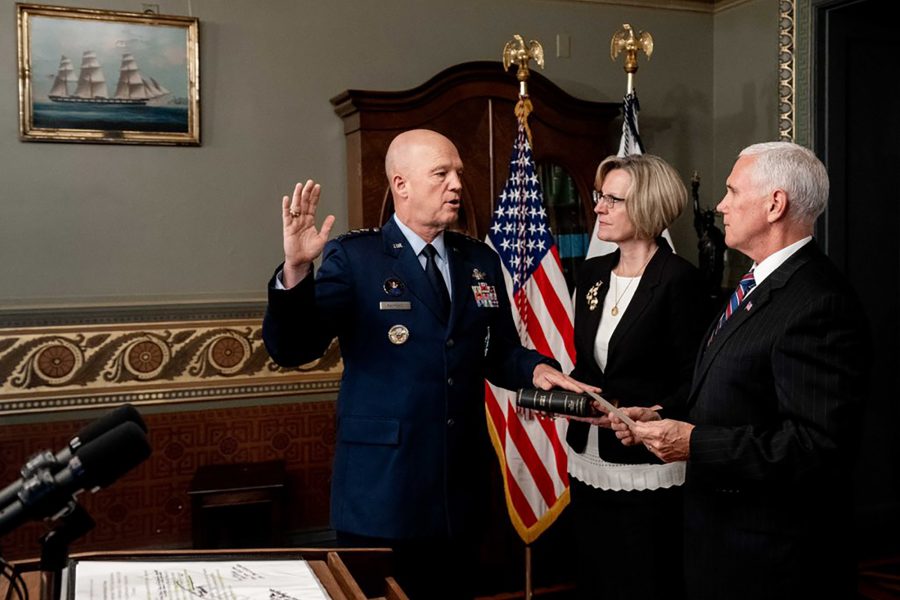 Gen. Jay Raymond was formally sworn in as the inaugural Chief of Space Operations Jan. 14 at a White House ceremony led by Vice President Mike Pence.

Raymond has been working as the Space Force’s first Chief since it was created Dec. 20. He also leads US Space Command, the combatant command that uses Space Force assets in daily operations, and managed USAF space resources as Air Force Space Command boss since October 2016.

AFSPC is now in the process of transforming into the Space Force, the sixth branch of the military that will sit within the Air Force. The new service is envisioned to wield more independence and authority over its resources than it could as an Air Force major command, and Raymond is in charge of architecting that fledgling armed force.

“The President and Congress have given us a great opportunity to build the force we need to respond to the challenges that we face in the space domain,” Raymond said. “Not only is this historical, but it is critical … to our national security and that of our allies.”

He’s the first military officer solely tasked with treating space as an area that needs protection itself and that is crucial to enabling combat operations elsewhere. The Space Force is eventually expected to absorb the space programs spread across the Army and Navy as well, providing a more holistic, focused approach to managing the domain. The CSO can join the Joint Chiefs of Staff after one year.

The Pentagon will deliver the Space Force’s first organizational plan to Congress in the coming weeks. In February, the Defense Department’s fiscal 2021 budget will provide more details about how much it costs to stand up the new service and what the military hopes to accomplish in that timeframe.

The Space Force will include about 16,000 Active Duty military personnel and civilian staffers from AFSPC at first, Air Force Magazine previously reported. Those people are immediately assigned to the service, but formally transferring employees between services will require them to volunteer for and re-enlist in new jobs in the coming months.

Raymond said revamping the military’s approach to space will help avoid conflict, not invite it.

“The Space Force’s measures of success will be that our adversaries are deterred and that our joint and coalition partners always have the space capabilities that our modern way of war and our modern way of life depend on,” Raymond said. “It’s now time to get to work.”