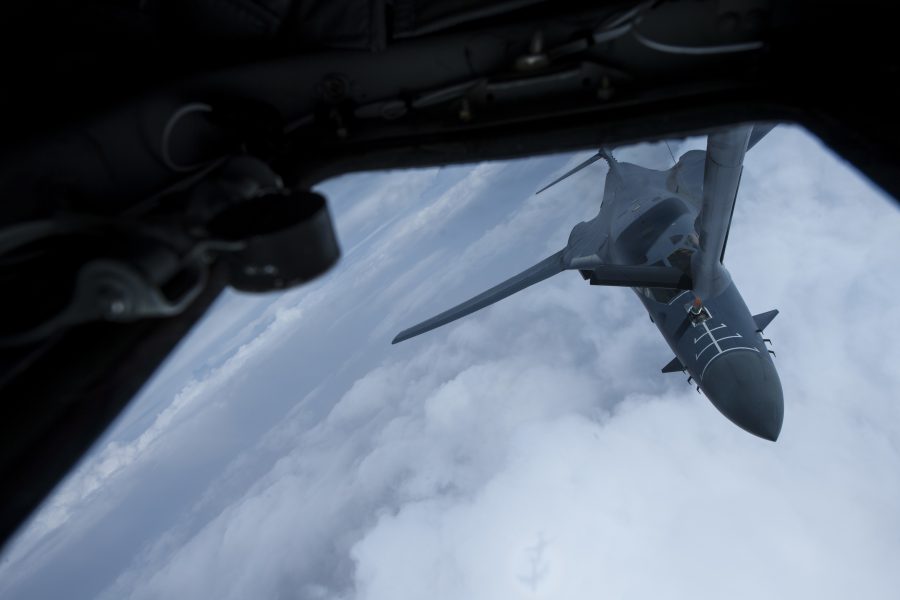 Air Force Global Strike Command chief Gen. Timothy Ray believes the arsenal plane concept likely means a new, “clean sheet” design rather than an existing bomber, he told reporters April 9. Ray also said the B-1 bomber is making huge strides in readiness recovery, discussed the preferred hypersonic missile for the bomber fleet, and suggested that AFGSC is getting out of the close air support business.

“The arsenal plane concept is probably better described as more of a clean-sheet approach to a platform that can affordably and rapidly fill the gap for long-range strike capabilities, and to go down more innovative paths,” Ray told participants in a Defense Writers Group telephone conference. Ray and Air Combat Command chief Gen. Mike Holmes have previously suggested the B-52 could fill the role of an arsenal plane loaded with standoff weapons to augment a stealthy conventional strike force.

The National Defense Strategy demands that AFGSC develop more capability in long-range strike. The “gap” Ray referred to would be the Air Force’s requested reduction in the B-1 fleet, assuming Congress allows it.

The B-1 is to be fitted with the Air-Launched Rapid Response Weapon, or ARRW, Ray noted. AFGSC plans to add external pylons that would allow the B-1 to carry six such missiles, in addition to other stand-off missiles mounted internally on rotary launchers, he said.

Air Combat Command and AFGSC agree that ARRW is the preferred hypersonic weapon, at least in the near-term, beating out the Hypersonic Air-breathing Weapon Concept being developed by USAF and the Defense Advanced Research Projects Agency, Ray said.

Asked about debate between Air Combat Command and Global Strike Command over ARRW versus HAWC, Ray replied that the two commands are “in a similar place in terms of ARRW being the thing we need to go move out with. We think we’ve got a good game plan going forward. We’ll continue to work with them. “ He added that “obviously the action officers will debate” but “we’re stepping out” on ARRW.

As for the air-breathing system—which presumably would be smaller and allow a greater loadout per platform—Ray said, “We think an air-breathing missile in the long run would also be something to consider, but we’re very comfortable with where the Air force is going in their selection on hypersonics.”

Fitting the B-1 with ARRW allows Global Strike “to take on that hypersonic mission faster,” Ray explained.

The B-1 has been turning in dismal mission readiness rates for several years because it was used as a high-altitude loitering munitions platform in Afghanistan and Iraq for a decade, rather than in its design role, to fly very fast and low. However, the fleet is recovering well, Ray said.

“I have a very positive recovery for the B-1 community,” he said. “I have more flyable airplanes and ready crews than we’ve seen in many years.” While he would not discuss mission capable rates for the B-1, crews are generating “at least 25 flyable airplanes a day,” he said. That’s “more sorties in a month than we’ve seen in the last three or four years.” Ellsworth Air Force Base, S.D., flew 100 B-1 sorties last month—something the base had not done in a single month for several years, he noted.

“I’m sitting on a significantly larger number of mission-ready crews,” Ray added, saying there has been “good progress, good momentum. I couldn’t ask for better.”

Ray suggested that to align with the National Defense Strategy, AFGSC is getting out of the close air support business.

The NDS “by necessity … focuses us to increase our long-range strike regardless of the platform. So we see an opportunity as we turn our hand from the close air support mission” to put more emphasis on long-range strike. “We have many platforms in the Air force that can conduct the CAS mission so, there’s no shortage of CAS capability,” Ray observed. But having aircraft with “long legs” is “particularly beneficial” to AFGSC’s primary mission, he said.