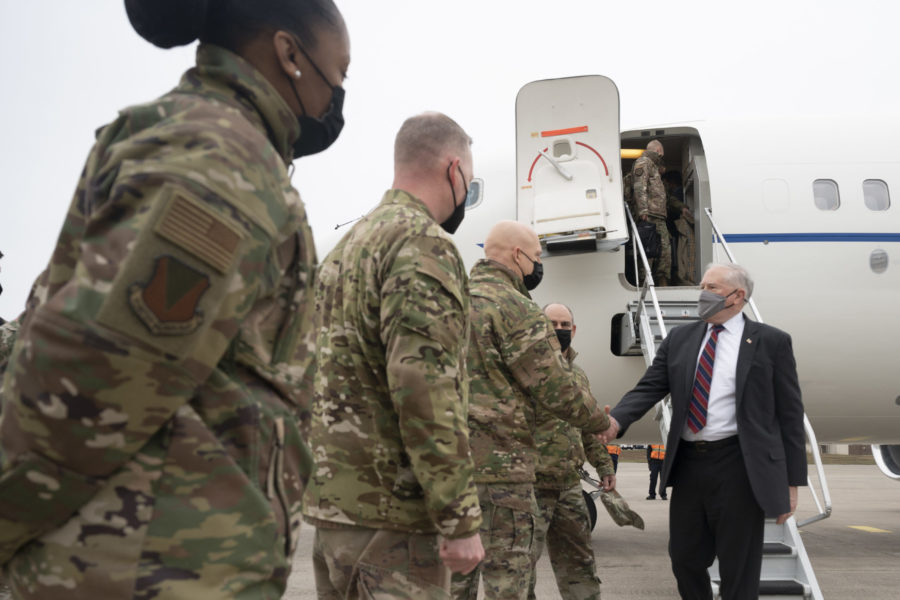 Ramstein Air Base is Ready for a Russia Contingency, but Not a ‘Worst-Case Scenario’

RAMSTEIN AIR BASE, Germany—The two 10,000-foot runways at Ramstein Air Base were quiet and the flight line was calm under overcast skies and a blistering winter wind Feb. 4 as base commanders from three wings juggled priorities from two theaters and prepared for a Russia contingency.

“That’s an ever-changing, crazy chess match in a lot of ways,” Brig. Gen. Joshua M. Olson, commander of the 86th Airlift Wing at Ramstein, told Air Force Magazine when asked if the air base is prepared to support contingencies related to tensions in the east.

“As contingencies go right now, again, I think we’re doing it, unfortunately, on the backs of our Airmen,” Olson added, describing demands by both U.S. European Command and U.S. Africa Command.

Three wings at Ramstein—the 86th, the 435th Air Expeditionary Wing, and the 521st Air Mobility Operations Wing—support two theaters under United States Air Forces in Europe-Air Forces Africa jurisdiction. With U.S. forces beginning to move to NATO’s eastern flank to reassure allies in the face of Russian aggression against Ukraine, the 86th is preparing for what may come.

“We’re always ready,” the commander assured. “We have some tools. But again, it’s a full array of options that we have to be ready for, right? So, do we have worst-case scenario tools? No. Do we have the fight-tonight tools? Absolutely.”

“We’ve been moving airplanes in support of NATO activities,” Harrigian told Air Force Magazine on the sidelines of the African Air Chiefs symposium in Kigali, Rwanda. Harrigian also leads U.S. Air Forces Africa and is dual-hatted as commander of NATO’s Allied Air Command, which is co-located at Ramstein.

“We’ve been able to work that between USAFE and AIRCOM because the planners are talking to each other,” Harrigian said. “It’s not only been the people,” he said, “but we’ve sorted out a lot of the interoperability challenges we’ve had of sharing info from our classified systems … to the NATO systems.”

USAFE public affairs chief Col. Robert A. Firman told Air Force Magazine at his Ramstein office that the 435th Air Ground Operations Wing has already moved forward to assist the Army’s deployment on the eastern flank, bringing multidisciplinary command and control and combat enablers to Poland and other locations. A NATO Baltic air policing rotation led by U.S. F-15s that ran Jan. 26-Feb. 4 also increased the frequency of its sorties. Members of the Estonian Air Force unload cargo from a C-130J Super Hercules, assigned to the 86th Airlift Wing from Ramstein Air Base, Germany, at Ämari Air Base, Estonia Jan. 24, 2022. Ämari Air Base is hosting the Belgian and U.S. Air Forces to conduct an enhanced air policing mission for NATO. Enhanced air policing was introduced in 2014 with the goal of assuring north eastern and south eastern allies, demonstrate the collective resolve of allies and demonstrate the defensive nature of NATO to deter adversaries from aggression or the threat of aggression against NATO allies. U.S. Air Force Photo by Staff Sgt. Megan Beatty

The 3,000 Army Soldiers that made their way to the eastern flank did not pass through Ramstein but transited Germany at U.S. Army Garrison Grafenwoehr at Vilseck on Feb. 3.

Firman said Ramstein was positioned to support President Joe Biden’s orders and the needs of the NATO alliance.

The spokesman pointed out the close level of coordination.

“We are working hard to stay in close touch with our NATO partners—we’re 200 meters away,” Firman said, noting the flurry of meetings taking place. “We’re getting ready for 24-hour ops, postured to be prepared for whatever happens.”

Olson shared the assessment that Ramstein is ready for whatever the Secretary of Defense or NATO partners require, whether that be loading C-130s, aeromedical evacuation, airlift, or airdrop needs. All will be ready.

“We are more than prepared for whatever Russia decides in Ukraine, and NATO decides to do,” he said.