Preparing for the C-5M 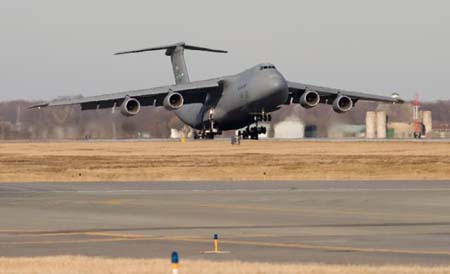 of Air Force Reserve Command’s 512th Airlift Wing at Dover AFB, Del., spent a year preparing to for the arrival of the first C-5M Super Galaxy transport at the base, which occurred Feb. 9. In addition to training to fly and maintain this new variant of the massive airlifter, members of the Reserve wing’s 709th Airlift Squadron and 512th Aircraft Maintenance Squadron wrote and validated C-5M operating procedures, manuals, and technical orders. The Reservists bring much experience to the C-5 mission. For example, CMSgt. Donald Cunningham, has been involved with the C-5 for 30 years and has more than 8,500 flight hours in the aircraft. By combining this experience with the resources of Dover’s active duty 436th AW, “we will be able to make this project successful,” and “the aircraft will perform and meet the increasing demands for worldwide airlift,” he said. Dover is scheduled to receive its second C-5M today. And, in August, three Dover C-5Ms are scheduled to begin operational testing. (Dover report by Capt. Marnee Losurdo)