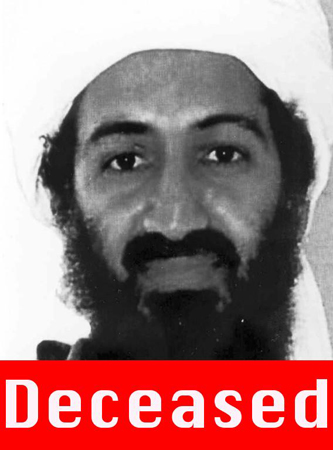 Air Frame: Year in Review, May 2011: US special forces on May 1, 2011, killed Osama bin Laden, head of the terrorist network responsible for the 9/11 attacks, in a raid on a compound north of Islamabad, Pakistan. Here, the FBI’s updated mug shot of OBL after his death. On May 3, 2011, the Air Force stood down the F-22 fleet out of concern over potential equipment malfunctions depriving pilots of sufficient oxygen. Also in May, the Air Force launched GEO-1, the first Space Based Infrared System geosynchronous early warning satellite into orbit and accepted its first production F-35A strike fighter. Also, Army Pfc. Anthony Kaho’ohanohano and Pfc. Henry Svehla posthumously received Medals of Honor for extraordinary acts of heroism in the Korean War. And, 1st Lt. Ryan McGuire became the first amputee to complete Air Force pilot training. FBI photo (Click on image above to reach larger version.)