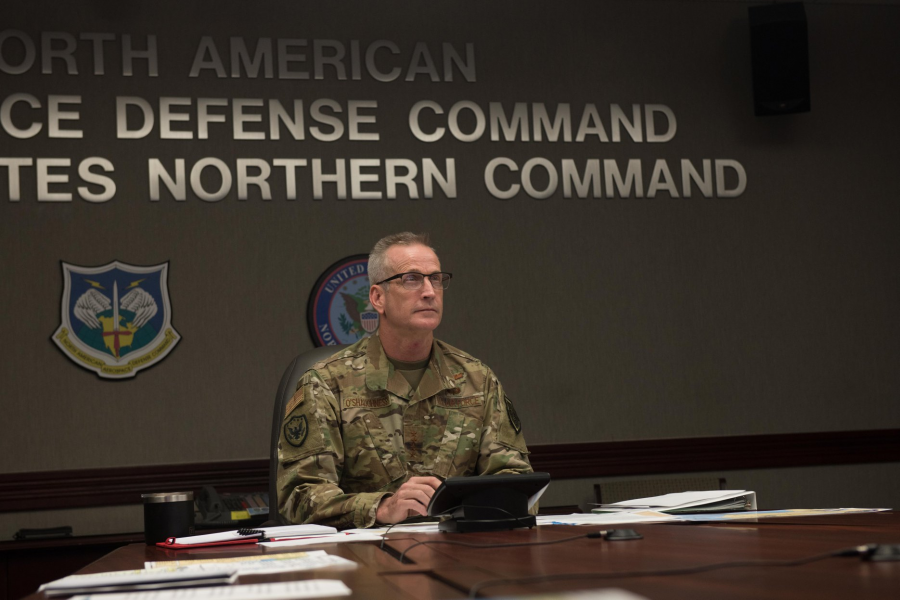 NORTHCOM and NORAD, which are tasked with protecting the homeland from attack, depend on a slew of radars and other data systems to monitor U.S. airspace. But those systems largely cannot communicate with other software, creating roadblocks in a process that should be fluid and collaborative.

So, the organizations launched their “Pathfinder” initiative to build a data ecosystem that lives in widely accessible digital cloud storage, and that pulls together many different streams of information into one operating picture.

“Because of the quantum leap in processing power that has been achieved since the fielding of the current system, and the approach used in [the Strategic Homeland Integrated Ecosystem for Layered Defense modernization strategy], Pathfinder is identifying information buried in the data, giving new life to old sensors.”

Pathfinder is also known as the “Air Threat Response” effort, run through the Defense Innovation Unit in California. DIU was created in 2015 to forge closer ties with Silicon Valley giants and tech startups and speed commercial products to the military. It revealed the Air Threat Response effort in its 2019 annual report released earlier this year.

The initiative applies “machine learning to classify objects and predict threats more quickly, allowing the operator to shift focus to decision-making rather than data and signal analysis,” according to the annual report.

DIU issued prototyping agreements to tech firms Kinetica and Raven Black in September 2019 to develop a product that NORTHCOM could test in exercises like the Air Force’s Advanced Battle Management System demonstrations. The prototype cost about $3.5 million between the two companies.

Kinetica focuses on high-speed data analytics and visualizations, while Raven Black handles cloud infrastructure. About 50 other companies bid to work on the program.

The Air Force moved the prototype into production with an $8 million order in late September. That contract is worth up to $100 million over five years. Kinetica co-founder Amit Vij hopes to give the military a product for daily use by the third quarter of 2021; Pathfinder initiative director Col. Ross Morrell wants to start using a basic product in the next 90 days, once their government cloud storage is approved.

NORAD and NORTHCOM aim to fully hand off Pathfinder to the Air Force in the next few years so the service can manage it in the long run.

A single data feed can produce around 400 to 500 million records every day, Vij said. While the company hadn’t worked on air defense before, it offers data tables that can store billions of records to decide what airborne activity is normal and what is not.

NORTHCOM personnel already have access to that information, but have to manually wade through data files and analyze it themselves to make use of it. Pathfinder streamlines the process so that piles of data aren’t ignored.

“For NORAD, weather and clouds are noise. There’s so much sensory information that can be thought of [as] one thing but may be another,” Vij said. “Bringing to the table machine-learning algorithms that can easily filter these kinds of noises out, it really makes the operators more proficient in keeping the homeland safe.”

The team also tested how well the system fared at noticing entities and activities in North American airspace, compared to NORAD’s existing technology.

Pathfinder platform lead Lt. Col. Joshua Close said NORAD’s assets and its tactics haven’t always been enough to catch potential problems nearby: “There was mission failure, or there were issues that they weren’t able to successfully complete.”

When presented with those scenarios, the Pathfinder prototype alerted personnel to issues where the legacy systems did not.

Pathfinder also helps the command share information with other parts of the military to make them more aware and to respond faster. It “takes all those different data feeds and correlates them into tracks … to say, of all the sensor feeds that are getting ingested, which ones correlate together into some kind of object in the air?” Nidess said.

Service members vetted that during the second ABMS demonstration in early September.

Its success means that the military can spend less time and money replacing older technology and instead focus on reaping what it already offers and presenting it in better ways.

Morrell said NORTHCOM is figuring out how to condense the information from several different air defense systems onto one or two screens with two- or three-dimensional graphics, instead of spreading that data across eight screens.

Streamlining that process and relying on computers to crunch the information instead of human brains frees up people, time, and money, Morrell said. While the technology proved it can identify and track oddities in U.S. airspace, he said he couldn’t offer any metrics to show whether Pathfinder sped up that work.

Kinetica will continue adding other data, like land, sea, and space surveillance, and classified sources, into the software. It will also work with NORAD and NORTHCOM to connect it to the rest of their enterprise. The FAA is pursuing its own version of the product as well.

“There’s a lot of things to do with regard to entity classification and entity resolution, so providing more precision and accuracy and saying, ‘This is such and such a plane,’ or ‘This is looking like so and so kind of signature,’” Vij said.