Skip to content
Members of the U.S. Air Force Honor Guard Drill Team stand at attention during the playing of The Star-Spangled Banner prior to the IPL 500 Festival Parade in Indianapolis, May 25, 2019. The U.S. Air Force Honor Guard presented the colors along with a joint service color guard comprised of service members from Indiana. (U.S. Air National Guard photo by Senior Airman Jonathan W. Padish)
Expand Photo 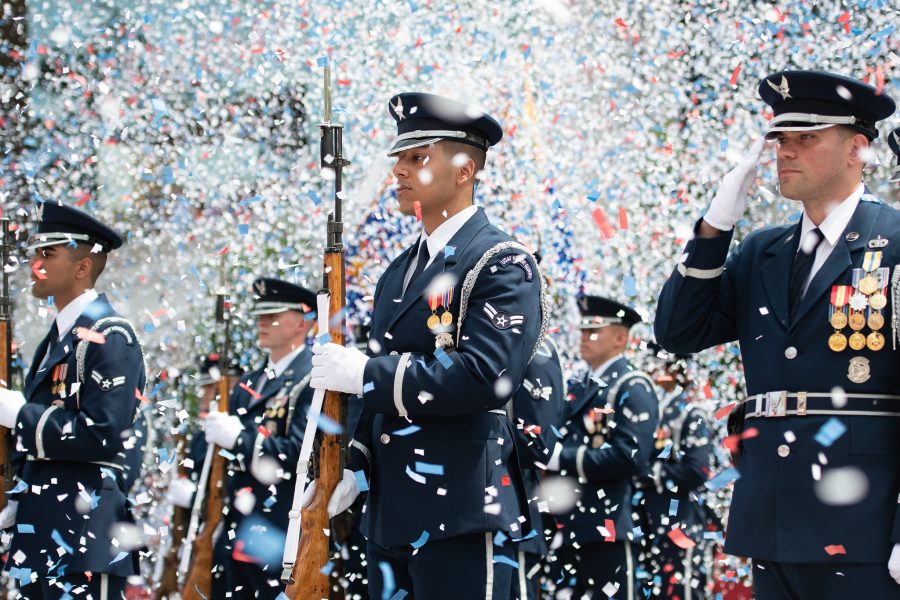 Defense Secretary Mark Esper told reporters Aug. 28 he’s not ready to say that recent US-Iran tensions have subsided, but that the Pentagon is holding out hope for diplomatic talks.

“I’m not sure I’m ready to call the crisis over yet, but so far so good,” he said at a press briefing. “We hope the trend lines continue that way. We hope that the parties, that the Iranians would agree to … meet and talk and help us resolve these issues.”

In the past few months, the US has declared Iran and its paramilitary arm responsible for attacking ships, seizing oil tankers, and downing a Navy drone.

Operation Sentinel, a multinational maritime effort to boost surveillance and security in the Arabian Gulf, Strait of Hormuz, the Bab el-Mandeb Strait, and the Gulf of Oman, is now underway, Esper said. The United Kingdom, Australia, and Bahrain are partnering with the US on the framework to escort properly marked vessels through those waters, according to US Central Command.

“The purpose of this operation is twofold: first, to provide freedom of navigation for the commercial shipping that is so vital to global economic trade, and second, to deter provocations and avoid conflict in the region,” Esper said. “We remain in discussions with many nations who have … a stake in the openness of this region and we expect to see the list of participants continue to grow.”

Chairman of the Joint Chiefs of Staff Marine Corps Gen. Joseph Dunford, who spoke alongside Esper at the briefing, said the US is changing how it plans for global threats posed by countries including Iran. The Pentagon has moved from its traditional focus on “operational plans for specific contingencies” to instead charting out plans that are specific to challenges laid out in the 2018 National Defense Strategy. That strategy is most concerned with China, Russia, Iran, North Korea, and violent extremism.

The New York Times reported Aug. 28 that the US secretly launched a cyberattack against a key Iranian database in June that helped to plan attacks on oil tankers. The US also temporarily degraded Iran’s ability to target shipping traffic in the Persian Gulf, according to The Times.

In recent months, the US has moved a number of traditional military assets into the region as well, including deploying F-22 fighter jets and B-52 bombers to Al Udeid AB, Qatar. F-15s and F-35s also headed to Al Dhafra AB, United Arab Emirates.

Esper said the presence of America and its allies and partners has deterred further “bad, provocative” behavior in the region. Still, Dunford refrained from drawing a direct connection between US forces in the area and diminishing Iranian capabilities.

“The forces that are in the region that the Secretary approved are to deter aggression and to provide the President with options in the event that deterrence fails,” he said. “It hasn’t had a material effect on the actual capacity of the Iranian forces or their proxies.”