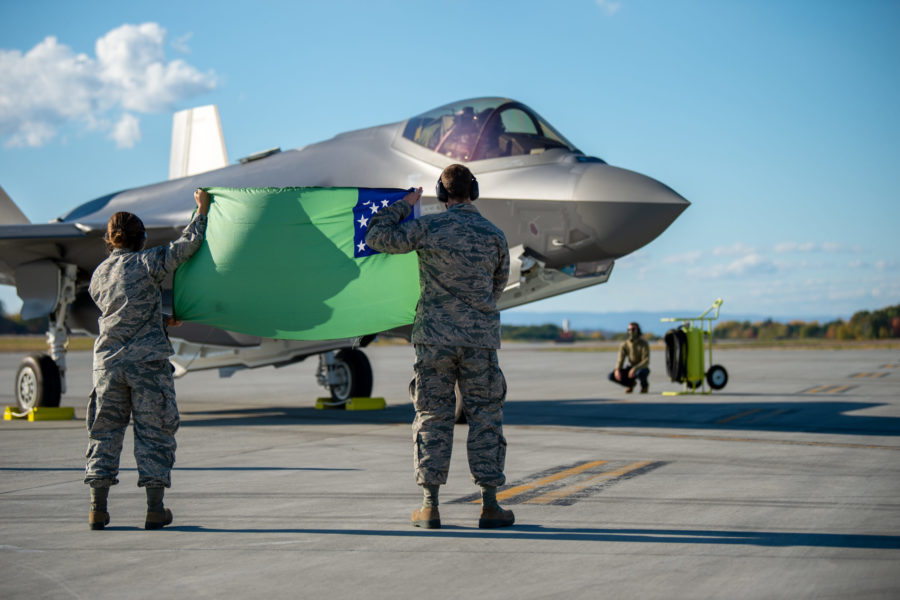 Pentagon acquisition boss William LaPlante is optimistic that the pause in new F-35 fighter deliveries will not drag on for long—but the problem does highlight a “constant” issue with the supply chain, he told reporters Sept. 9.

The halt in deliveries, announced Sept. 7, came after Honeywell, a subcontractor for the F-35, informed Lockheed Martin that an alloy in a magnet in the jet’s turbomachine came from China.

“They’re moving pretty quickly,” LaPlante said of the investigation. “They’re looking at two things … impact on security, if any, and impact on airworthiness or safety, if any. Right now, so far, it doesn’t appear to be either of them, but I’m waiting for them to finish what they’re looking at and come to me. It’s likely, if in fact we find neither of those to be the case, we’ll be able to do a waiver and do the replacements and get the production line moving again. So I’m hoping this can be resolved pretty soon.”

Both Lockheed Martin and the F-35 Joint Program Office have said the magnet doesn’t transmit any information. It also doesn’t “harm the integrity of the aircraft, and there are no performance, quality, safety, or security risks associated with this issue,” according to a statement from JPO spokesman Russell Goemaere.

Goemaere also confirmed that flight operations for already delivered F-35s aren’t affected by the alloy issue, even though every F-35 delivered to date contains the Chinese material.

The Air Force became the first service to accept a production model F-35 in 2011, indicating the alloy issue dates back more than a decade—and that controlling the supply chain remains a challenge for the Pentagon and the defense industrial base, LaPlante said.

“I think there’s a bigger picture here, [on] which there is ongoing study a lot, which is called supply chain illumination. And that is the understanding of primes’ suppliers, of what is even in their supply chain,” LaPlante said.

Such a task is complicated by the fact that major defense contractors rely on massive, sprawling webs of suppliers—a recent DOD report cited an average of 200 “first tier” suppliers for American aerospace companies, with more than 12,000 suppliers in the second and third tier. The alloy provider was a fifth-tier supplier.

And even the contractors themselves don’t always have a full sense of all their suppliers.

“I had a CEO of a company tell me about two weeks ago that he thought he had 300 suppliers [and] he discovered, when he counted all of his suppliers, he probably had 3,000 suppliers,” LaPlante said. “And suppliers can change overnight. And so what this is becoming, and it’s been recognized for some time, [is] almost a real-time issue of tracking and making sure that there’s integrity in your supply chain.”

In fact, LaPlante said, “any company that says they know their supply chain is like a company saying they’ve never been hacked.”

Moving forward, though, the Pentagon hopes to leverage new technologies to work with contractors and help track their supply chains.

“The good news is there are tools coming out, using artificial intelligence and open source, that can dive in and maybe find some of these things,” LaPlante said. “But I think it’s going to be a constant issue for us, is understanding our supply chain.”