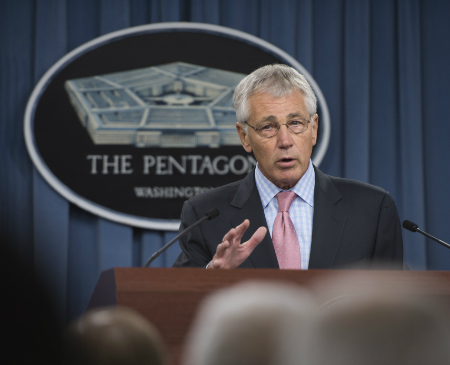 The just-ended partial shutdown of the federal government cost the Defense Department at least $600 million, said Defense Secretary Chuck Hagel and Pentagon Comptroller Robert Hale on Thursday. “At a minimum,” there was $600 million in lost productivity due to the furlough of Pentagon civilians and items like canceled training, paying vendors late, and disruptions to personnel change-of-station moves, said Hale during a press briefing with Hagel. While the shutdown affected some programs, Hale said DOD would be able to catch up fairly quickly. The newly enacted budget continuing resolution funding Pentagon operations through mid January will impact activities, such as military construction projects, but overall, the larger effect of the shutdown will be on people’s morale, he noted. Hagel echoed the sentiment, noting that DOD still must weather the budget sequester. The fiscal uncertainty is devastating morale, and in the long term, the Pentagon won’t be able to recruit capable talent, said Hagel. Referencing his recent trips to Asia, Hagel said US allies are taking notice of the impacts. “Our allies are asking questions,” he said, and wondering if they can rely on America to fulfill its commitments. (Hagel-Hale transcript)