Skip to content
Senior Airman Caden Thao is one of 12 Outstanding Airmen of the Year for 2022. Air Force photo.
Expand Photo 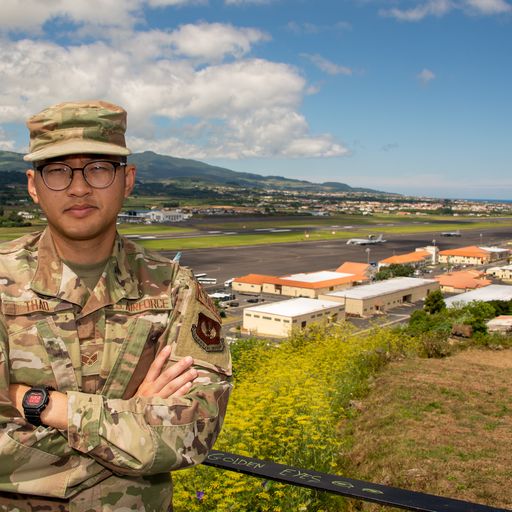 The Air Force’s 12 Outstanding Airmen of the Year for 2022 will be formally recognized at AFA’s Air, Space & Cyber Conference from Sept. 19 to 21 in National Harbor, Md. Air & Space Forces Magazine has highlighted one each weekday through today, when we honor Senior Airman Christopher T. Thao, a network operations technician for the 65th Air Base Squadron at Lajes Field, Portugal.

Thao’s parents were refugees during the Vietnam War. He grew up hearing stories about their time in American refugee camps and how they still remembered the service members who supported and guided them into their new life. So when Operation Allies Welcome first began, Thao considered the mission a providential opportunity to return the favor.

“I actually volunteered to [go],” he said. “I was like, hey, it’d be awesome if I could pay it forward and help these people. Maybe one day they will remember that, and then they can help other people in that same situation.”

To support the operation, Thao deployed to Joint Base McGuire-Dix-Lakehurst in N.J. His initial assignment was on an eight-person team that operated as a community support task force. The team directly supported 70,000 Afghan evacuees in simple community aspects such as helping them with directions, giving them food and basic medical attention, and keeping the children entertained. After a month and a half, the team shifted to become security forces augmentees.

Thao considers unforeseen changes in his assignment as opportunities for personal growth, which he, in turn, transforms into communal growth. While he was stationed at Schriever Space Force Base, Colo., he revived the Airmen’s Council and began organizing mock below-the-zone boards. The mock boards helped A1Cs prepare for BTZ (or six-month-early) promotions—Thao researched the real boards by interviewing senior NCOs and teaching classes that explored how they would be tested.

“I was able to combine all that into the actual mock boards. Our first mock BTZ board [was] super successful because we had eight Airmen go to it,” Thao said. “Three of those, including myself, had the actual board the next month. [The three of us] were the only ones who got the BTZ. So technically it was a 100 percent success rate the first time—which is pretty insane.”

Because of his background in cyber systems operations, Thao was also selected to lead a $1.2 million desktop infrastructure overhaul at Schriever—with only a week of lead time. He was familiar with the systems, but not an expert. That didn’t stop him from giving it all he had, though.

His hard work paid off. Thao spearheaded the team that rebuilt nine servers and 480 workstations in a week. His efforts eliminated weekly network outages and propelled systems’ availability rate to 99 percent for 2,000 personnel, enabling the $71 billion mission for 14 geographically separated units and 15 Special Access Programs in the Peterson-Schriever area.

“It’s just hard work,” Thao said about what drives him, mentioning how his parents worked their way out of poverty to build a successful life in America. “Their story is what inspires me. If I’m having difficulty trying to do something … I just think hey, my parents did it. And they said, ‘Just put the work in and see what happens.’ And so that’s what I do.”

Thao hopes his recognition among the Outstanding Airmen of the Year for 2022 can inspire others the way his parents inspired him.

“If I could become [an OAY], then anybody else can,” he said. “You just have to be very intentional of what you want to do with your growth. Don’t be afraid to fail. Just throw 110 percent in and see what happens.”

Meet the other Outstanding Airmen of the Year for 2022 below: