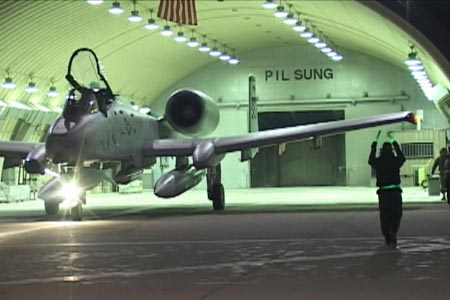 The 25th Fighter Squadron at Osan AB, South Korea, has completed its transition to the A-10C ground-attack aircraft, with the departure of the unit’s last A-10As. Osan’s A-10Cs began arriving in March. Among the improvements, the A-10C configuration features digital cockpit upgrades and allows the pilot to employ satellite-guided munitions. These changes “provide attack pilots with a truly integrated suite of sensors, aircraft, and weapons that build situational awareness and facilitate the rapid destruction of targets,” said Maj. Andrew Taylor of Osan’s 51st Operations Group. “In short,” he added, “the A-10C perfects what was already the world’s most respected CAS platform.” A-10As began operating at Osan in 1982. The last A-10As left on Dec. 4, heading for a new assignment with an Air National Guard unit back in the United States. The A-10C has a combat-ready part of USAF’s inventory since August 2007. (Osan release)