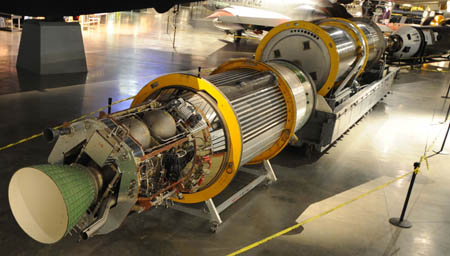 and industry officials on Thursday placed three formerly classified photo-reconnaissance satellites on display in the Cold War Gallery of the National Museum of the Air Force in Dayton, Ohio. Gambit 1 KH-7, Gambit 3 KH-8, and Hexagon KH-9 used specially designed cameras and film to take photos from orbit from the 1960s to the 1980s. Gambit and Hexagon “were America’s eyes in space and the most sophisticated satellites of their time,” said National Reconnaissance Office Director Bruce Carlson. He added, “These systems were critical for monitoring key targets in the USSR and around the globe and provided much-needed cartographic information to the DOD to produce accurate, large-scale maps.” Gambit 1 satellites flew from 1963 to 1967. The next-generation Gambit 3 satellites, which operated between 1966 and 1984, included better image resolution. Hexagon satellites were the last US satellites to return photographic film to Earth. They flew from 1971 to 1984. (Dayton report by Rob Bardua) (See also NRO release.)