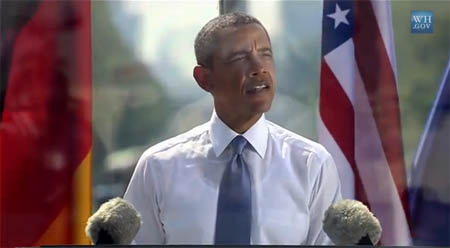 President Obama called for further nuclear cuts during a speech before thousands at Berlin’s Brandenburg Gate on June 19. Obama said a completed review of US nuclear forces has determined it can guarantee the potency of the country’s nuclear deterrent even with further reductions of deployed strategic nuclear weapons beyond New START levels. “I intend to seek negotiated cuts with Russia to move beyond Cold War nuclear postures,” Obama said, after announcing the US will reduce its deployed strategic warheads by up to a third of its current arsenal. The US also will work with NATO to seek reductions in US and Russian tactical weapons in Europe, build support in the US to ratify the Comprehensive Nuclear Test Ban Treaty, and said the US would host a conference in 2016 to continue efforts to secure nuclear materials around the world. The proposed cuts would take the number of deployed strategic warheads for both countries below the limit of 1,550 set by the New START treaty. While Obama received support from Democrats, some Republicans said the approach is reckless without including China in talks. “Any future nuclear discussions must include China,” said Rep. J. Randy Forbes (R-Va.), chairman of the House Armed Services Committee’s seapower and projections forces panel, adding China is modernizing its nuclear forces and poses the “most direct challenge to the global rules based order.” (Obama transcript)