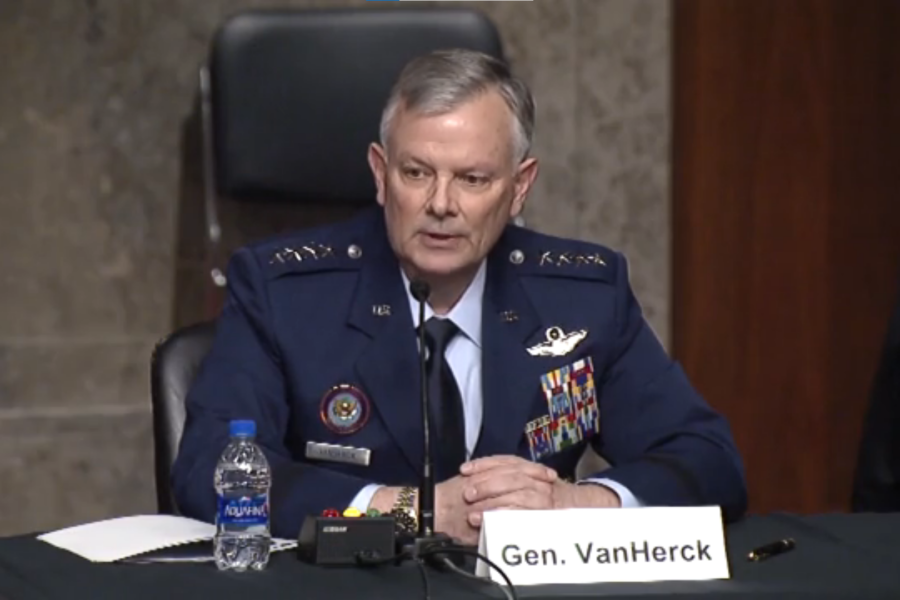 “We don’t want to be in a situation … where end game defeat is our only option,” he said.

Sophisticated cruise missiles could be launched from significant distances from North America, such as from bombers over Russian soil or from submarines or attack vessels. “Whether subsonic or hypersonic, these missiles can range targets in the homeland and present a very real challenge for our defensive capabilities,” he said in testimony. “Russia has already amassed an inventory of both nuclear and conventional variants, while China is expected to develop similar capabilities in the next decade.”

Maintaining a healthy triad is the first defense from this threat, VanHerck said. But, NORAD also needs capabilities to go “further left … of the archer, before takeoff” so it can be aware of the threat quickly and provide the “decision space,” he said.

“The proliferation of these systems creates all the more incentive for focused investments in improved sensor networks, domain awareness, and information dominance capabilities,” he said in testimony. “Those investments, coupled with the development of layered denial, deterrence, and defeat mechanisms capable of addressing current and emerging threats, are fundamental to the defense of our homeland.”

NORAD is currently capable of defending from a “limited number” of ballistic missiles from a rogue actor, such as North Korea. However, “capacity is the biggest challenge going forward” with a small number of ground-based interceptors (GBI), VanHerck told reporters during a March 16 press conference at the Pentagon.

The Missile Defense Agency is undertaking a service-life extension program on GBIs, which includes pulling them out of the ground and going “through them with a fine-toothed comb” to try to determine which parts are likely to fail. Other boosters are also getting “additional capabilities” as part of this process, he said.

The next step will be the Next Generation Interceptor program. Deputy Defense Secretary Kathleen Hicks is currently assessing the decision to proceed. The Pentagon has been working toward two development contracts, with plans calling for MDA to pick two teams to build up to 20 new interceptors, Breaking Defense reported.

Additionally, VanHerck said he expects the new Long Range Discrimination Radar at Clear Air Force Station, Alaska, to progress quickly. It is expected to power up in September. He said his “No. 1 requirement” with MDA on this is “timing, to not have any slips in delivery of that capability.”