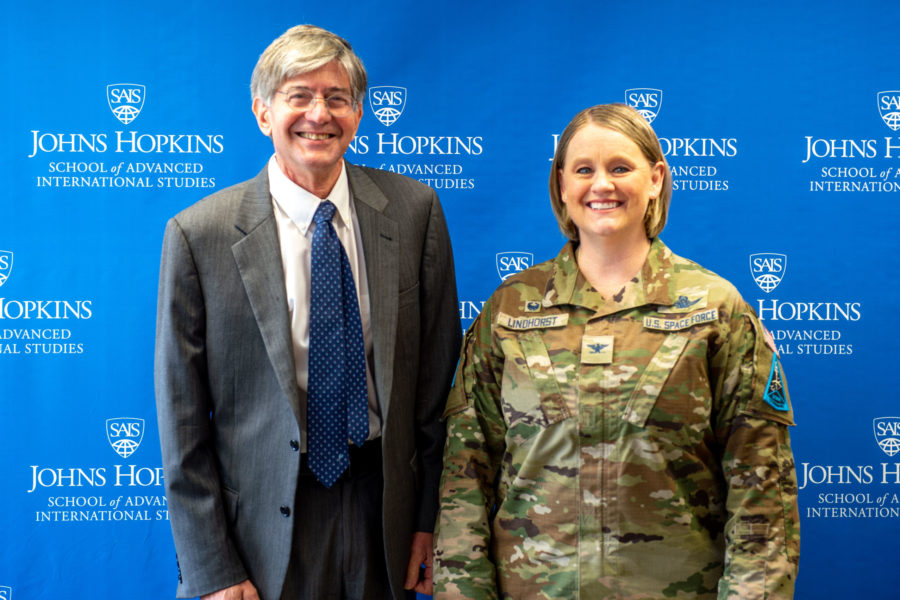 Some of the Space Force’s top officers will have a new option for intermediate- and senior-level developmental education starting in 2023.

The Space Force announced a new partnership with Johns Hopkins University on Oct. 26. The plan is to provide service-specific, in-residence programs at its School of Advanced International Studies in Washington, D.C.—part of what the service is touting as a new “independent” approach to professional military education.

Other services, including the Air Force, typically run most of their PME through military educational institutes such as Air University. Only a select few officers are tapped for graduate programs or fellowships at civilian institutions, and those who are also have to complete distance learning programs at military institutions such as Air Command and Staff College, National Defense University, or the Army War College in order to receive Joint Professional Military Education credit for their development.

By contrast, the Space Force’s partnership with Johns Hopkins will go deeper, with 62 slots in the first year growing to 85 in time. Some of those spots will go to civilians and service members from other services as well as international students. Space Force faculty will transfer from Air University to Johns Hopkins, the service noted in a release.

All in all, it’s an approach that Bratton called “unique” within the military, and it’s based off very early direction from Chief of Space Operations Gen. John W. “Jay” Raymond, who stressed the need for independent PME, Bratton said.

“Early on, before there was a STARCOM, Gen. Raymond had written in his planning guidance for the service that we’ll develop independent PME by 2023,” Bratton said. “When I came in to stand up STARCOM, it’s one of the few things that was very kind of [a] directive and a specified task, like ‘You will go do this.’”

Working on that directive, Bratton said, his staff considered the possibility of establishing a Space War College to mirror institutions from the other services.

“But we’re so small compared to the other services, it just seemed like that would be a lot of bureaucratic growth to develop an independent program,” Bratton said. “And so early on, we started to talk about partnerships and how we think about that.”

That led to a request for proposals and an application process for schools. And early in the process, Bratton said, the service began targeting universities around the Washington, D.C., region.

“In many cases, about 60 percent of the cases, people will come out of school, and they go to work in the Pentagon. That is a pretty common career path when you come out of both intermediate and senior developmental education,” Bratton said. “Not always, but in a lot of cases. So if we can … avoid those moves for kids in school, spouse careers, and [get] a little bit of cost savings for the government in the PCS moves, we thought there was benefit there.”

Bratton cited his own experience moving his family from Vandenberg Air Force Base, Calif., to attend the Navy War College in Rhode Island, then moving again after 10 months. In some cases, he noted, families may not even move with the service member and instead treat the PME like a deployment.

“We wanted to reduce the burden on the family in that instance,” Bratton noted.

PME location is an issue the Air Force has to contend with. A 2021 study by RAND’s Project Air Force found that many officers and families “voiced concerns about the location at Maxwell Air Force Base in Alabama,” particularly with regard to the quality of local public schools and employment options for spouses.

At Johns Hopkins, Guardians will obtain a master’s in International Public Policy. Foreign Policy ranked Johns Hopkins’ master’s program for international relations third in the world, and U.S. News & World Report placed the program in a tie for fourth nationally among Global Policy and Administration Programs.

The students will also have access to other Johns Hopkins courses for electives.

“As long as you meet the prerequisites, we think there’ll be an opportunity for some Guardians who are pursuing STEM electives, that perhaps they can go up to the Applied Physics Lab and do some work there,” Bratton said. “And so, for sure, we have a huge elective catalog to choose from. It really gives a lot of opportunities for Guardians that wouldn’t be available, certainly, if we had tried to stand up our own school. We just wouldn’t be able to support that with faculty.”

“We’ve made a good choice here in avoiding creating a big bureaucratic institution [like] if we had tried to create the Space Force University,” Bratton said. The Space Force has instead been “smart about, ‘Hey, we’re a small service. Because of that, we’re able to do things differently than the Army, Navy, and Air Force.’ … We’re pretty excited about it. We still have a lot of work to do between now and next summer, but looking forward to kicking it off.”