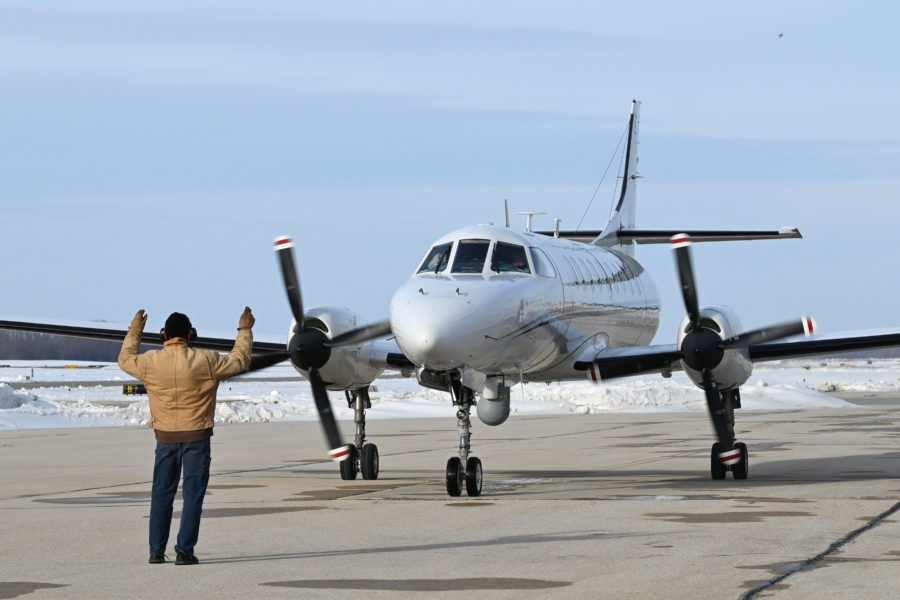 No Longer Protected by Congress, Air Force RC-26 Fleet Heading to the Boneyard

The Air National Guard is retiring its entire fleet of 11 RC-26 Condors, the Air Force said Jan. 6. The twin-prop plane had an often under-the-radar but sometimes controversial role as a reconnaissance aircraft used for both counterdrug and homeland security missions.

A converted civilian airliner, the aircraft attracted unwanted attention several times recently, and for years the Department of Defense has sought to retire the aircraft in favor of cheaper platforms such as drones.

Those efforts had been blocked by advocates on Capitol Hill, most vocally former Rep. Adam Kinzinger (R-Ill.), an RC-26 pilot in the Air National Guard. In both the 2020 and 2021 National Defense Authorization Acts, there were provisions preventing the Air Force from using funds to retire the Condor.

No such provision made it into the 2023 National Defense Authorization Act, though, and Air Force said that without a need or funding for the aircraft, the plane will finally be out of service.

The Wisconsin Air National Guard concluded operations on Dec. 28, it announced. Representatives for the Air National Guard did not say whether all RC-26 operations have ceased—Alabama, Arizona, California, Iowa, Mississippi, New Mexico, Texas, West Virginia, and Washington all have the aircraft as well.

The Air Force said all 11 RC-26 aircraft will head to the Boneyard at Davis-Monthan Air Force Base, Ariz.

While the Air Force sees no requirements for the RC-26, the Wisconsin National Guard touted the aircraft’s usefulness in its release.

“Officers, civilians, suspects, families and regular citizens who have no idea that the reason that they are alive is because those guys were experts at their jobs, helped chase down and arrest drug dealers, in ways that could not have been done in any other platform,” Lt. Col. Benjamin West, the Wisconsin Air National Guard’s program manager, said in a statement.

“Having spent a large time of my policing career in narcotics work, I can tell you that this mission saves people’s lives,” added Army Col. Paul Felician, director of the Wisconsin National Guard’s counterdrug program. “The stuff that this aircraft enabled law enforcement to do took more drugs off the street and kept people safe from having to go into the direct risk of harm—it’s a sad day to see it go away.”

But the RC-26’s use in law enforcement missions was questionable at times, according to the Air Force’s own accounting. The aircraft monitored protests and relayed information to law enforcement in Minnesota, Arizona, California, and Washington, D.C. after the murder of George Floyd in police custody the summer of 2020. Congressional concerns prompted an Air Force Inspector General investigation, which concluded that the National Guard Bureau erred in its deployment of RC-26s in some cases.

The aircraft were directed to fly “overhead imagery Incident Awareness and Assessment (IAA) missions in support of law enforcement and/or National Guard units responding to destruction of property and violence” after Floyd’s murder in 2020, the report said.

“Properly approved missions can support civilian law enforcement, but there is no scenario in which it is acceptable or permissible to use DOD assets to deter demonstrations and protests, assuming they remain lawful,” the report said.

The National Guard Bureau didn’t have “a clear authorization” approved by civilian leaders before RC-26s began flying the missions, according to the IG report, and some of the missions over protests were, in the inspector general’s view, implausibly done for “training” purposes.

Air National Guard leaders have said the platform should be retired because cheaper platforms such as drones could fulfill counternarcotics and homeland security functions. Lt. Gen. Michael A. Loh, Air National Guard director, said the cost to keep RC-26 in the fleet—$30 million per year—could be used to field and invest in newer systems.

“It’s an old aircraft, and there’s current language right now that says I can’t retire that fleet or even expend money to prepare to retire that fleet,” Loh said in 2021. “And so, each year, I’m spending millions of dollars to keep a fleet alive that quite frankly has run its useful life, and I need to actually get out of those to get into something new.