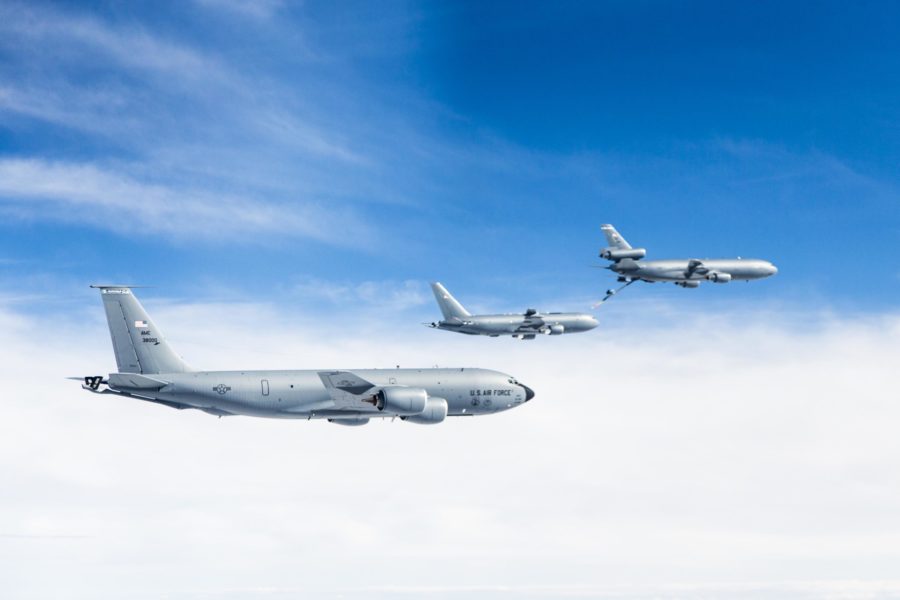 The new aircraft certified for the KC-46 include the AC-130J Ghostrider, KC-130J Combat King, MC-130 Commando II, C-5M Super Galaxy, and E-3G Sentry. “In addition, we are putting the Pegasus against our highest priority missions, such as direct Presidential support,” said Lt. Col. Kevin White, AMC’s deputy chief of the Aircraft and Logistics Requirements Division and the KC-46 cross-functional team lead.

The announcement marks the fourth “interim capability release” for the KC-46 since July, when it was cleared to refuel aircraft using its centerline drogue system. Since then, three groups of aircraft have been added, using the boom-type refueling system. These include the B-52, C-17, other KC-46As in August; and the F-15 and F-16 in October. The interim capability releases are not proceeding according to a preset schedule but rather as “incremental confidence measures,” AMC said. These “allow the AMC commander and other senior leaders to qualitatively and quantitatively assess achievements,” the command said.

The KC-46 is operating under restrictions due to deficiencies in its Remote Vision System, which allows the boom operator, located just behind the cockpit, to remotely refuel aircraft at the back of the aircraft. Both the KC-135 and KC-10 allowed direct viewing through windows. The Air Force and Boeing are working to integrate an upgraded RVS that eliminates problems with lighting under certain conditions.

Despite these and other deficiencies, “the KC-46A continues to demonstrate its growing operational capabilities,” AMC said. “Crews will continue to fly training, exercise and demonstration missions until all operational confidence measures are met.”

The Air Force has said the KC-46A can be pressed into service for all types of receiver aircraft in a wartime crisis.

AMC reported that the Pegasus has completed over 6,000 missions, offloading over 37.8 million pounds of fuel and making 28,000 boom and 1,900 drogue contacts since January 2019.

The Air Force plans to acquire 179 KC-46s under the KC-X program, meant to replace most KC-135s and all KC-10s. It is to be followed by the “KC-Y” program, which has recently been called the “bridge” tanker, which will be another conventional aircraft that will replace the balance of the KC-135 fleet, beginning around 2028. The Air Force has said the “KC-Z” program may pursue a smaller, low-observable aircraft to refuel USAF airplanes in or near contested airspace.

Boeing is the prime contractor on the KC-46A program and to date has incurred losses of about $5 billion on the fixed-price program.

Fifty KC-46As are in the Air Force’s inventory following the delivery to Joint Base McGuire-Dix-Lakehurst, N.J., of two aircraft in November. Other operational KC-46A bases include McConnell Air Force Base, Kan.; Seymour-Johnson Air Force Base, N.C.; Pease Air National Guard Base, N.H.; and Altus Air Force Base, Okla.