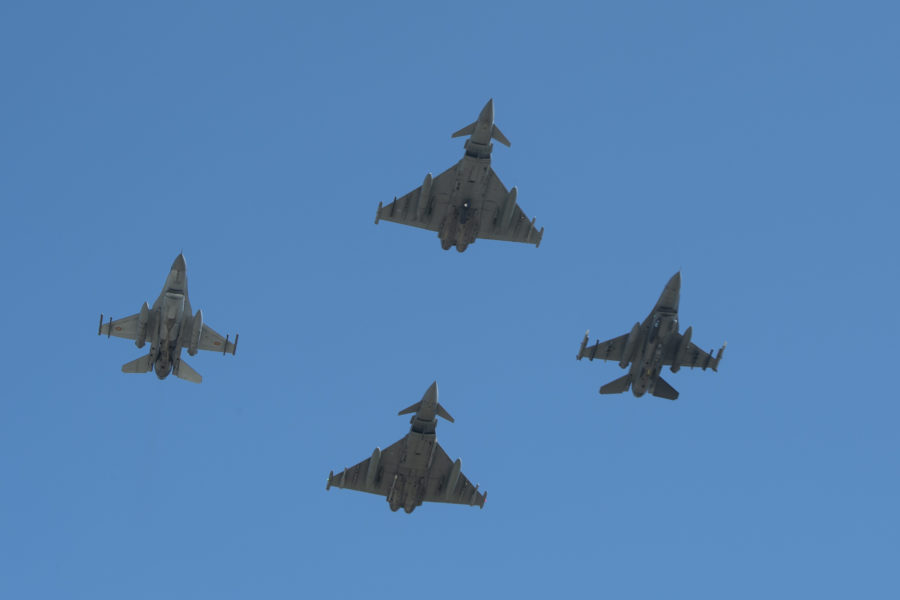 MIHAIL KOGALNICEANU AIR BASE, Romania — NATO jets scrambled from this Romanian base four times in the last 20 days to intercept Russian fighters that launched from Crimea, flying toward NATO territory along the Black Sea coast. Each time, the Russian jets turned away without incident, but the flights represent a growing threat to the alliance.

The intent of the Russian practice was not immediately clear to the NATO air policing commanders and Combined Air Operations Centre in Torrejon, Spain. But, it underscored the importance of the mission to protect the skies over what defense officials say is the NATO front line in the Russian war with Ukraine.

“We react to them anytime any Russian aircraft flies in the Black Sea,” he added. “We need to be sure that we are there, ready, in front of them, just in case.”

The CAOC commander was on hand alongside Romanian, American, and other NATO officials for a ceremony at MK marking the handover of the NATO enhanced Air Policing duties in Romania from Italy to the United Kingdom.

The UK adds six Eurofighter Typhoons to the eight Italian Typhoons that exercise the mission along with Romanian MiG-21 Lancers and F-16s, and six American F-16s from the 480th Fighter Squadron at Spangdahlem Air Base, Germany.

The ceremony exercised a “tango scramble,” unique to NATO, whereby four combat jets are airborne in formation within 15 minutes. The jets raced overhead in a diamond formation with the UK typhoon in the lead, an Italian Eurofighter in the back, and a Romanian F-16 joined by a U.S. F-16 from nearby Fetesti Air Base on the wings.

Chief of Staff of the Italian Air Force Lt. Gen. Luca Goretti publicly disclosed the four scrambles in response to a question by Air Force Magazine.

“When they take off from Crimea protecting their vessels on the Black Sea, they [Russian jets] might … fly over us,” he said. “They might fly next to the boundaries and then turn back when they see us in the air. That gives a good indication that they can no longer move everywhere they want.”

U.S. Air Force Lt. Col. William Parks, 480th Fighter Squadron detachment commander, said the exercise also is a symbol of NATO’s readiness to defend the skies even with a variety of platforms of different sizes and capabilities.

“We’re executing 24/7 CAPs with all the NATO partners across the entire eastern front,” he told Air Force Magazine on the sidelines of the event. “It gives a chance for us to show that we are integrated completely with our NATO partners, and that includes in tight formations.”

Italian and British Air Force officers said Moscow is watching what NATO is doing in NATO airspace on the Black Sea coast.

“We are the first line of defense,” he added. “And I have no doubt that Russia is watching very carefully all the way from Norway all the way down into the Mediterranean.”