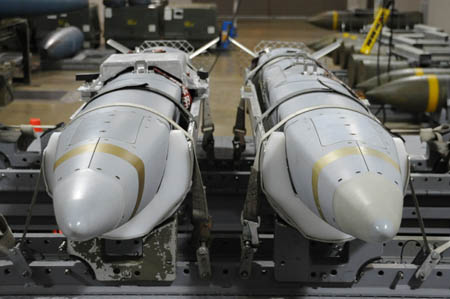 Air Combat Command officials are preparing an information package so that the command’s leadership can make the call whether the Raytheon-built Miniature Air Launched Decoy is ready for combat, an ACC spokeswoman told the Daily Report. ACC “has not yet officially declared” that MALD is cleared for real-world operations, said command spokeswoman Kelly Sanders. This milestone is known as reaching initial operational capability. Sanders said the MALD IOC info package “is expected to be ready” this month for the commander’s review. MALD performed successfully in a flight test on March 21, noted Sanders. MALD is a small jet-powered decoy designed to deceive enemy air defenses by making them think they are tracking an opposing strike aircraft. B-52H bombers and F-16s will deploy them. Raytheon is also developing MALD-J, a radar-jamming variant of the baseline decoy, for the Air Force. (See also Barksdale report by A1C Micaiah Anthony)