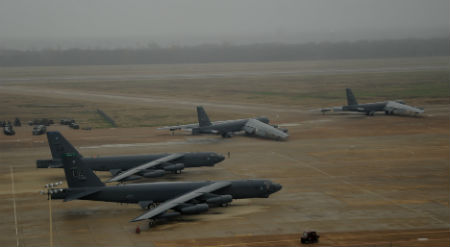 Air Force Global Strike Command is beginning a thorough Force Improvement Program with 8th Air Force bomber wings that will mirror its efforts in the ICBM mission, AFGSC boss Lt. Gen. Stephen Wilson told Air Force Magazine. On May 27, family surveys went out to 8th AF personnel, and FIP teams will begin interviews in June. “We will in essence do the same thing,” with 8th AF as we did with 20th Air Force, Wilson said, focusing on operations, maintenance, security forces, and mission support (there will be no study of helicopter operations, since 8th AF has no helicopter squadrons). The 8th AF FIP teams will include bomber crews, Navy submariners, ICBM missileers, as well as dual capable fighter crews with nuclear responsibilities, such as units in US Air Forces in Europe-Air Forces Africa. Air Force Secretary Deborah Lee James and Chief of Staff Gen. Mark Welsh have been “actively engaged” in improvement and reform efforts at Air Force Global Strike Command since February, said Wilson. James recently met with Defense Secretary Chuck Hagel to go over the “big rocks” in four areas: manning, mechanics of funding, processes surrounding personnel and inspection regimes, and lastly the structure of how AFGSC is put together. Service leadership has been helpful figuring a path forward on all four fronts, added Wilson.