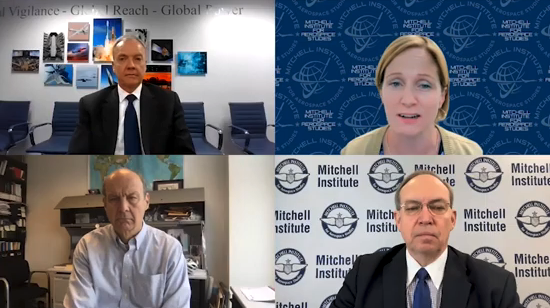 Unmanned aerial vehicles and autonomous aircraft may provide a solution to operating in heavily contested domains such as the Taiwan Straits, according to a panel of expert who suggested operationalizing artificial intelligence for such purposes sooner rather than later. The group gathered virtually May 12 to help launch the Mitchell Institute for Aerospace Studies’ new Center for UAV and Autonomy Studies (MI-UAS). The Mitchell Institute is part of AFA.

“China, in particular, has developed networks of very long-range missiles, electronic warfare systems, and other power projection capabilities that could severely limit or even prevent the ability of the U.S. to defend its interests in the Indo-Pacific,” said Caitlin Lee, Mitchell Institute senior fellow for UAV and Autonomy Studies and head of the new center.

“UAVs may have an important role to play in this fight,” Lee added.

UAVs such as the Reaper and Predator have already reduced risks to aircrews and operate at a lower cost than manned aircraft, she said.

But operationalizing UAVs for great power competition—and achieving Air Force Secretary Frank Kendall’s operational imperatives of uncrewed aircraft being part of the Next Generation Air Dominance (NGAD) fighter and the B-21 bomber platforms—will require a change in the way the Defense Department thinks about the use of unmanned aircraft systems (UAS).

“Everybody knows the extensive anti-access/area denial capabilities that China has deployed over the last 20-plus years are going to be brought to bear,” said David Ochmanek, a defense researcher at RAND Corp.

But the Obama-era deputy assistant secretary of defense for force development saw a way to counter such an offensive.

“Imagine 1,000 unmanned UAVs over Taiwan and over the Taiwan Strait,” Ochmanek posed.

The small aircraft would fly at a high, sub-sonic speed, with a radar signature indistinguishable from an F-35’s. The UAVs would fly in front performing a sensing mission while manned aircraft flew in the rear.

“Imagine now being an SA-21 [missile defense system] operator on the mainland of China, or on one of the surface action groups trying to predict [what will happen],” he said, noting that the UAVs would also gather and share target data, while others could be equipped with jamming devices.

Tim Grayson, special assistant to the Secretary of the Air Force, said getting to that point will require diversifying the missions on which UAVs are employed.

“If we start looking at really diversifying the types of missions, you could get to the point where as the price goes down, I can afford to take more risk with it,” he said.

The Air Force could then use the platforms to attack manned aircraft, expensive surface-to-air missile systems, and jammers.

“At that point in time, I can start thinking about missions entirely differently, … prioritizing mission effectiveness over survivability,” Grayson said.

He argued that with Global Hawk, the Air Force already operates an autonomous UAV conducting an intelligence, surveillance, and reconnaissance mission.

Getting to that envisioned point in time within years, rather than decades, means operationalizing autonomous UAVs today, Ochmanek said, asking rhetorically how 10,000 Uber drivers are managed on the island of Manhattan.

“It’s not Mildred sitting in a switchboard saying, ‘Joe, you go to the corner of 42nd and Broadway.’ No, it’s the AI,” he said, referring to artificial intelligence. “It’s not that hard, given the state of current computing, to imagine a system where the targeting grid is commanding and controlling itself.”

While the discussion participants agreed that human oversight is still required, they argued that AI is ready for some missions today, but that certification and doctrine will need to catch up.

“We know there are some missions where the autonomy and the AI is mature enough to be able to use now,” Grayson said.

“What we’re missing is what I’ll generically call the DOTMLPF,” he added—the acronym for doctrine, organization, training, material, leadership and education, personnel, and facilities. The Air Force will need to develop testing, certification, and ways for Airmen to train with UAVs and to adjust techniques, tactics, procedures, and doctrine.

“We cannot wait until we’ve solved all of those problems to move out and do some of this,” Grayson said. “We’ve got to start working the operationalization and fielding of this today.”