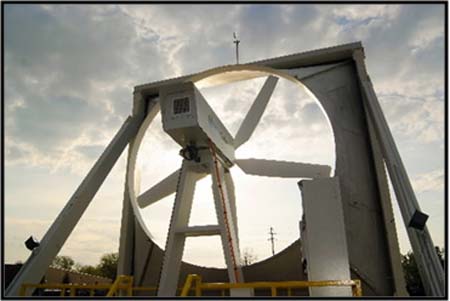 Ohio Air National Guard’s 179th Airlift Wing at Mansfield Lahm Airport is “aggressively pursuing” a three-phase alternative energy project in the hopes of becoming completely energy independent, Lt. Col. Troy Cramer, the wing’s environmental manager, told the Daily Report during a visit to the northcentral Ohio installation. Among the clean-energy initiatives, the wing aims to become the first Air National Guard site to install a “windcube,” a 22-foot-tall stackable five-bladed system enclosed in a square metal frame. The roof-mounted cube would produce as much energy as a 50-foot tall wind turbine and would be capable of powering the entire building on which it sits, Cramer said. Also under phase one, wing officials have proposed a one-acre, ground-based solar field to power several facilities. Phase two would include construction of a $3 million system that captures gas from a nearby landfill and pipes it to a generator that converts the gas to electricity. Preliminary data show that the landfill could have enough gas to power the entire base for 20 years, said Cramer. Phase three envisions establishing a large geothermal system under the main parking areas to recover underground heat and use it to heat wing buildings.