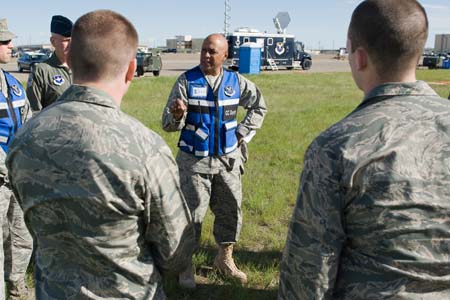 Force Global Strike Command held its first-ever response task force exercise at Malmstrom AFB, Mont., June 1-4. The RTF is made up of first responders such as firefighters and public affairs officials who would rapidly engage following an incident involving nuclear weapons at one of the Air Force’s nuclear bases. (Malmstrom is home to the 341st Missile Wing and its Minuteman III ICBMs.) AFGSC now has responsibility for these incidents in the continental US. This exercise involved a simulated scenario in which a commercial gas tanker collided with an Air Force vehicle carrying a Minuteman component near the base, according to a Malmstrom spokeswoman. “From the initial response to the management of the entire exercise scenario, the 341st Missile Wing’s performance was superb,” said Brig. Gen. Everett Thomas, Air Force Nuclear Weapons Center commander and RTF boss. (Malmstrom report by Michele Tasista)