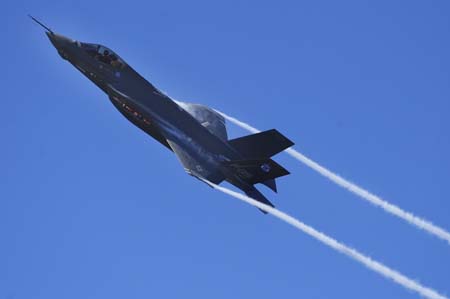 There was considerable ballyhoo last week when Arizona officials and business leaders launched the state’s new Luke Forward campaign designed to secure the F-35 for Luke Air Force Base, but there are still some dissenting voices. The Phoenix Business Journal reports that the El Mirage community close to Luke is considering pursuing legal action like Valparaiso, Fla., which believes the new aircraft will be much noisier than the fighters they replace. Some folks around Arizona’s Davis-Monthan Air Force Base, also under consideration for the JSF, are worried about increased noise, too. Still, Arizona Gov. Jan Brewer is among those concerned that Luke might close if it doesn’t get the new fighters. At a press conference, Brewer called Luke “the ideal location,” saying she pledged to help “demonstrate our state’s preparedness and commitment” to ensure Luke remains USAF fighter pilot schoolhouse. (Also read Arizona Republic report; Examiner report; Glendale Star report; ABC 15 TV report)